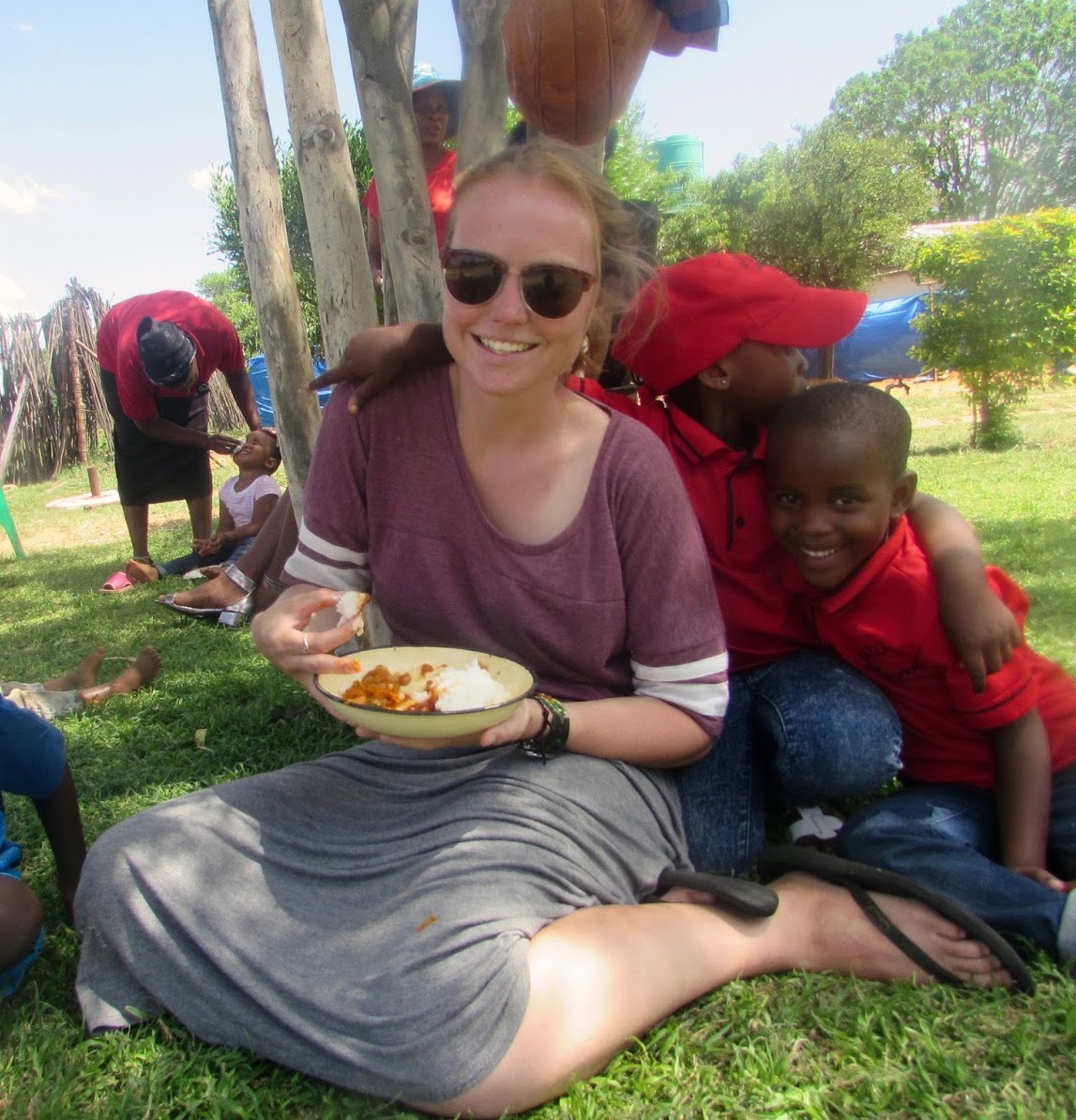 Whenever I talk to someone in America, one question they always ask is… “What do you eat?” As a vegetarian (and some would say ‘picky eater’), my food diary is not an accurate representation of the food in South Africa or the food that most other volunteers eat. So, in an effort to give y’all a more in-depth look into South African food, I thought I would touch on all of it. (P.S. I got all these pics from the web, no copyright infringement intended blah blah blah)

Pap is the most important food in black South African culture. Most people eat it on a daily basis and sometimes it’s the entire meal. The most “American” thing I can compare it to is Cream of Wheat: bland and dense. It’s very popular because it’s cheap, easy enough to make, lasts a long time, and is dense in calories, which is important for people who can’t afford a lot of food or don’t eat a lot. One of our LCF’s said, “It’s not a meal unless there is pap!” I ate a lot of pap when I was living with my host family, but now that I live on my own, I won’t be cooking it myself.

Chakalaka: I love this stuff. It reminds me of curry. It’s basically a bunch of veggies in a spicy, curry-esque sauce.

Mango Achar: Think “pickled mango”. Honestly, I’m not sure if it’s actually “pickled” mango, but it’s mango slices that are soaked in oil and become crunchy. Not my favorite, but definitely interesting. (This may even be an Asian import….)

Obviously chicken is something I don’t eat, but I’ve heard from other volunteers that it’s nearly impossible to find chicken meat without bones, even at the bigger grocery stores (although most people raise their own chickens and slaughter them). As much as I hate the idea of killing and eating a chicken or cow, I respect the fact that South African’s don’t let any part of the animal go to waste. They eat everything, to the point that they crack the bones and suck the bone marrow out. Another popular dish is chicken feet. Yep, they eat the feet. People also eat the entire cow face, like, all of it. Strange meat doesn’t just come from chickens and cows; a few volunteers in my cohort even ate Ostrich neck while living with a host family. However, I have yet to hear of anyone eating pig or turkey.

Meat is expensive, especially for a lot of families here in South Africa, so a very popular food is Soya Mince. It’s basically soy meat, which for me as a vegetarian is amazing!

Pumpkin is very popular here. I still don’t know if it’s actually pumpkin, or just squash and people call it pumpkin. It reminds me of baby food and therefore, I don’t eat it.

Yes, french fries are called chips here and I ate them a lot with my PST host family.

People put mayonnaise on everything! Some examples: eggs, pasta, salad (they use mayonnaise as a salad dressing)… everything.

In SA, ketchup is called tomato sauce, so be careful what you ask for on your pasta. It’s a universal condiment and it’s put on most things that mayo goes on.

South Africans cook with a ton of oil! My host mma would make me eggs and they would come back drenched in oil. It’s shocking that I didn’t gain 50 pounds living with my PST host family.

The eggs here aren’t refrigerated; the LCFs say it’s because they go straight from farm to table and therefore don’t need to be cold for longevity’s sake. I used to eat the eggs until one evening my mma made me scrambled eggs and I could’ve sworn I saw a tiny embryo.

Every morning when I lived with my host family I ate corn flakes. At first, my mom would warm up cream to put on my cereal but I eventually convinced her to let me use cold cream. Normally, I don’t like milk at all, and the idea of using cream instead of skim took even longer to adjust to.

The only milk sold in South Africa is called Long life milk, it’s milk that can last 21 days outside of the fridge! I know it sounds gross, but I think it’s to help families who don’t have electricity and therefore can’t store milk in a fridge, or families who can’t afford to buy milk every week when it goes bad. The concept is kinda “ew” but I got used to it.

As far as I can tell, Hershey’s chocolate is not a thing here, but Cadbury is, and it’s delicious! If I want to treat myself, I buy a Caramel Cadbury Dairy Milk candy bar.

For some reason, apricot jam is much more popular than grape or strawberry jelly.

Some popular brands that dominate the market here in South Africa are Jungle Oats (basically oatmeal), Black Cat (the most popular brand of peanut butter), Simba Chips (similar to Ruffles), and Eet Sum Mor (a cookie that tastes like Trefoils).

Lunch: Peanut butter and jelly sandwich, chips, and an apple or banana

Dinner: Pasta; chips and pap; mayonnaise salad; eggs (until I vetoed them); rice

My host mma is a great cook and sometimes would make latkas (which they obviously didn’t call latkas cause they aren’t Jewish), hush puppies, or French Toast!

What I eat now

Most mornings I have Jungle Oats with bananas. I eat a lot of peanut butter sandwiches, sometimes with jam, sometimes with bananas. I like green peppers a lot. For dinner, I usually make pasta or ramen (yep, they have ramen here). To be honest, I’m not doing too well in the food department. Anyone who’s ever lived with me knows that I HATE cooking (and can’t really do it even if I wanted to), and there is little access to pre-cooked food here in SA, therefore, I don’t eat a lot. Also, taking a public taxi over an hour to the nearest grocery store and then traveling back with bags full of groceries is a pain in the ass. I have a tiny fridge that doesn’t hold much, so I can’t keep a lot of food that needs to be refrigerated. I try to drink Sprite when I can or put cream on my oatmeal just for extra calories, but it’s a struggle.

Where do I shop for groceries?

I hope this answers any questions about South African food! A lot of this food is specific to South African villages and there is a bit more variety in the big cities. I highly suggest doing some research on your own and possibly making one of these dishes (my fave is Chakalaka) to taste for yourself!

To blog or not to blog…