The Peace Corps mission is guided by three goals:

All of PCV activities (should) meet one of these three goals. I do Goal One projects in my community (Zazi, health sessions etc.), and I frequently blog about my experience in South Africa to meet Goal Three, but I wanted to do some more Goal Two projects.

So, what better way to introduce South Africans to American culture than to throw a Halloween party?!

Halloween is not celebrated in South Africa, and definitely not in my village, but it’s my favorite holiday and I wanted to bring it to the children of Mmametlhake.

I ran into a challenge when I realized that South African communities are very wary of witchcraft and sorcery, which is a big part of Halloween. The last thing I wanted was for my community to think I was trying to brainwash their children or turn them into devil worshippers (which is a very real possibility). I talked to my supervisor and he agreed that if we downplayed the “witchcraft” aspect of Halloween and introduced the material in a specific way, we could avoid any conflict. I also sent a permission slip home with each child so their parents would be aware of the party and the topics we would be covering.

I also decided to make my party a lock-in! Sleepovers are unheard of in small South African villages, but I heard about successful lock-ins from other PCVs so I decided to give it a try. Plus, I thought it would be a fun experience for the kids and something they would remember forever.

Hosting a Halloween party is no small feat. Hosting a Halloween lock-in is even harder. Therefore, I decided to limit the party to 20 children and only invite grade 5 and 6 learners. This lock-in would be a trial run for future parties.

I think I’m gonna let the pictures speak for themselves…. 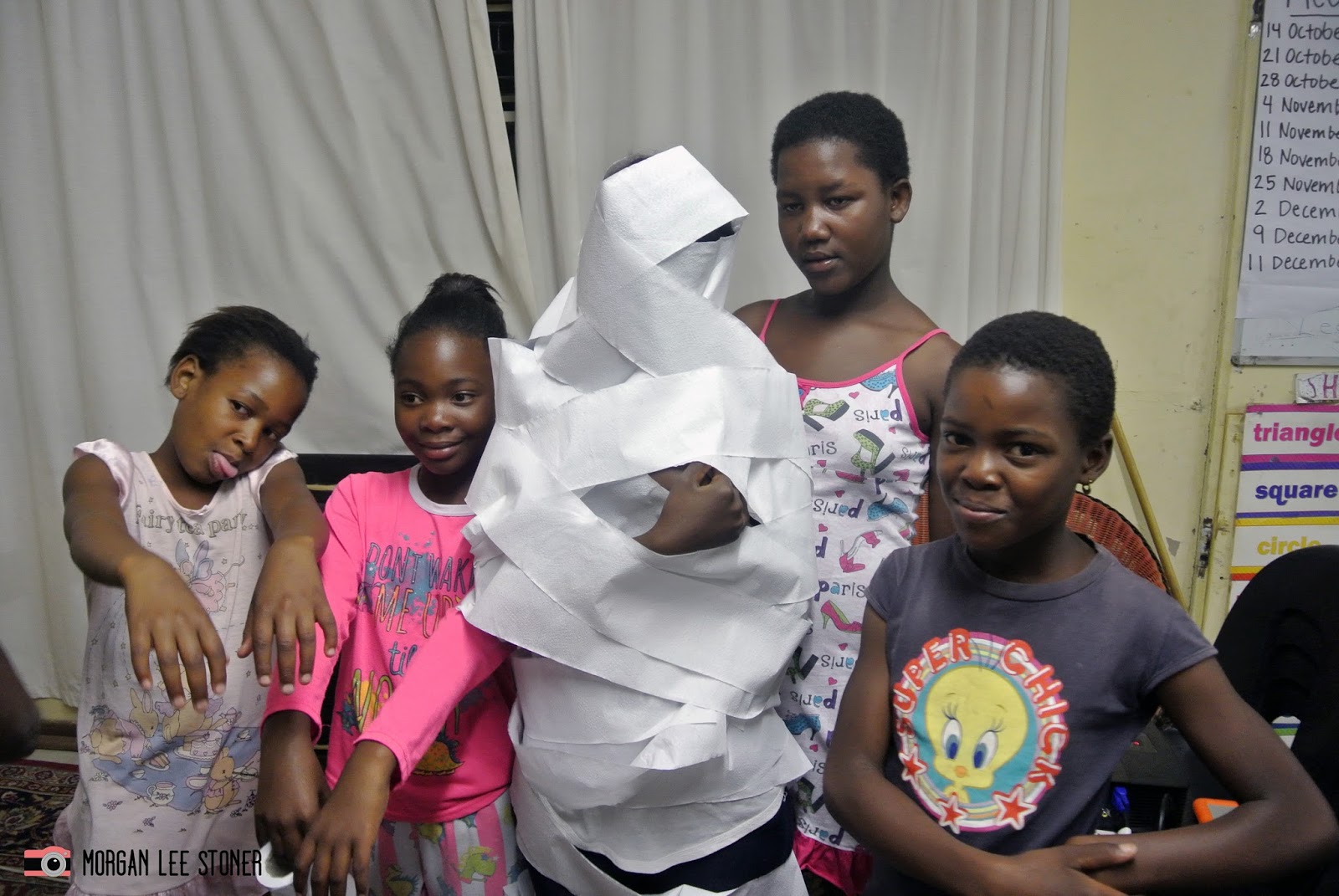 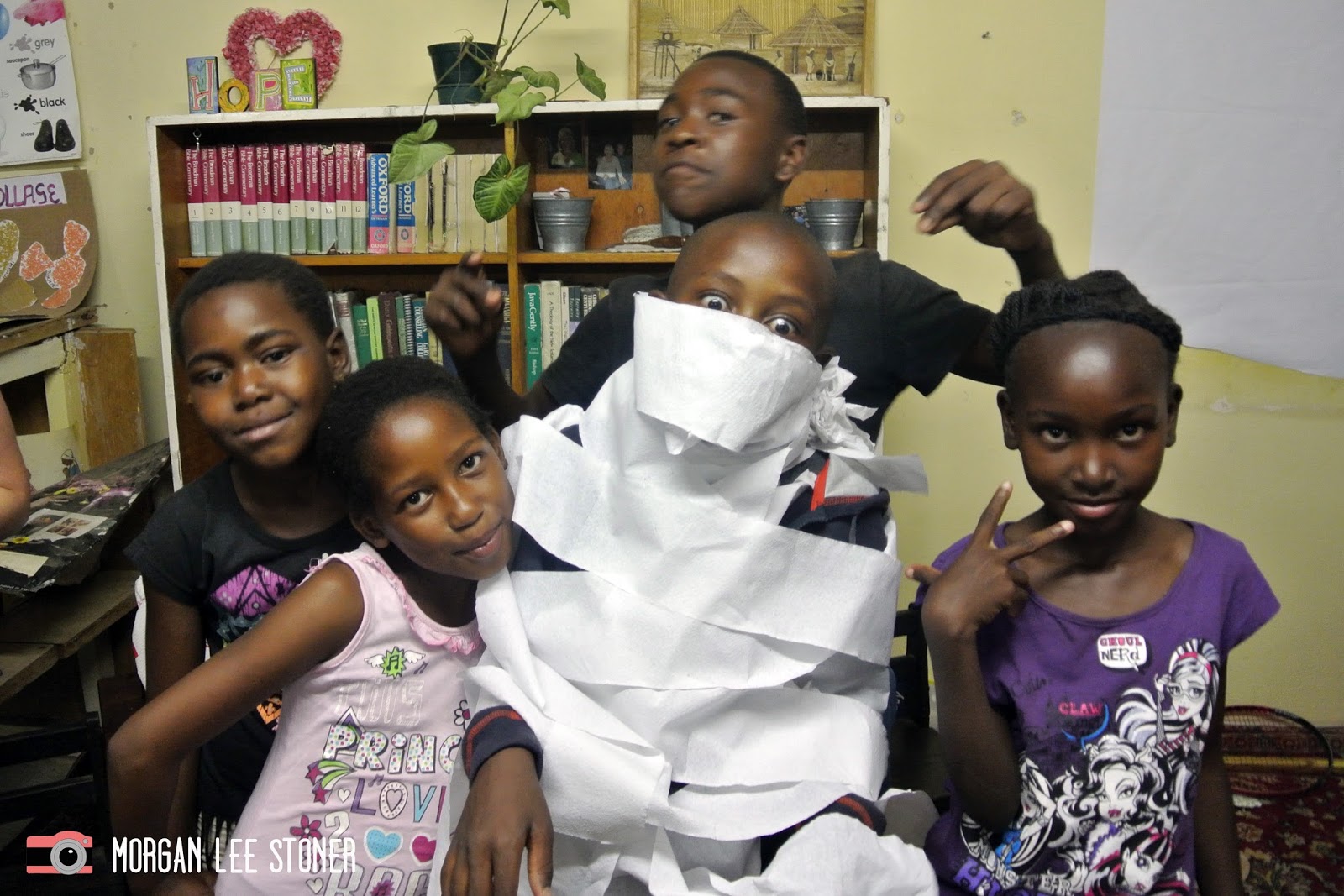 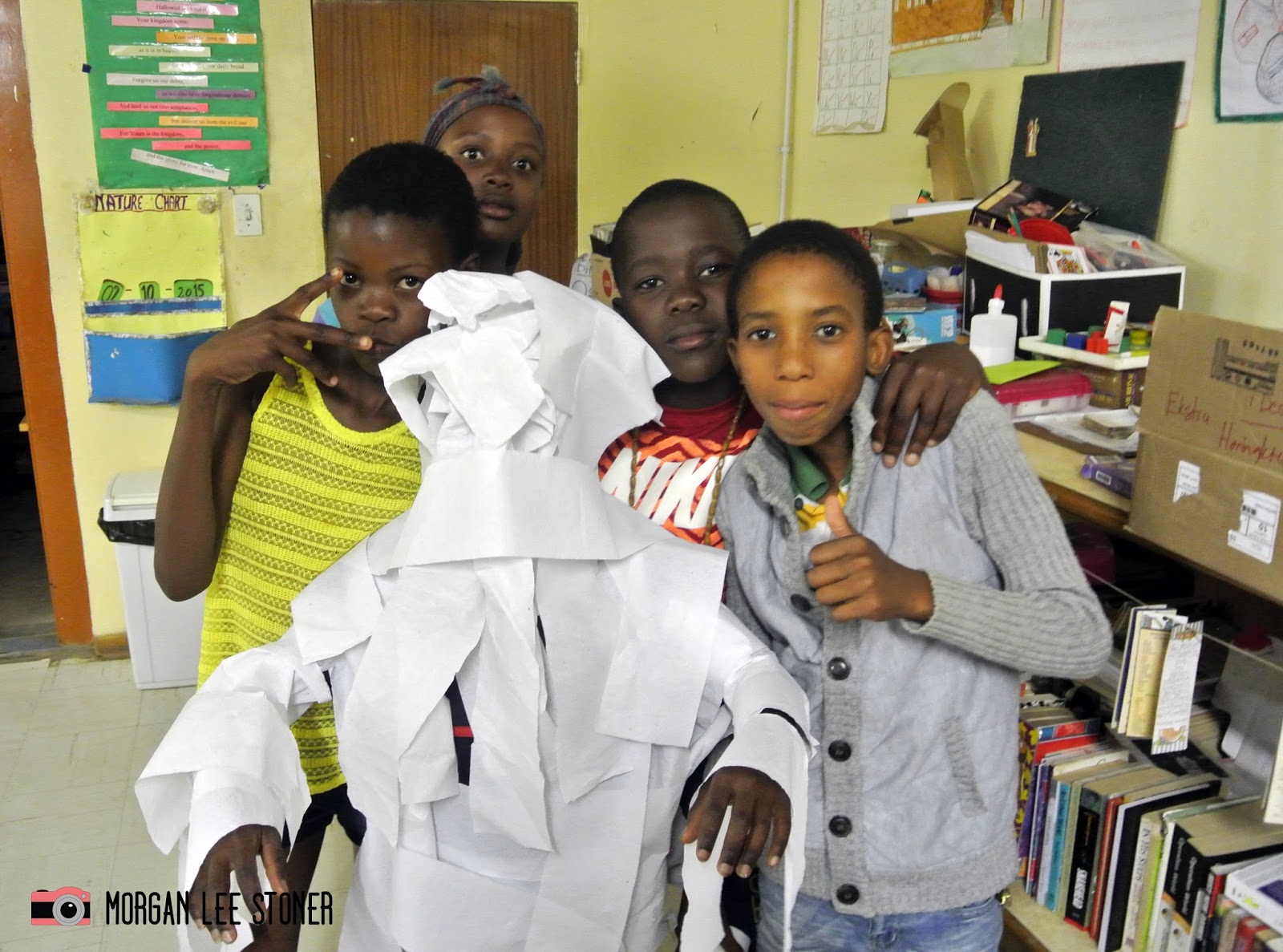 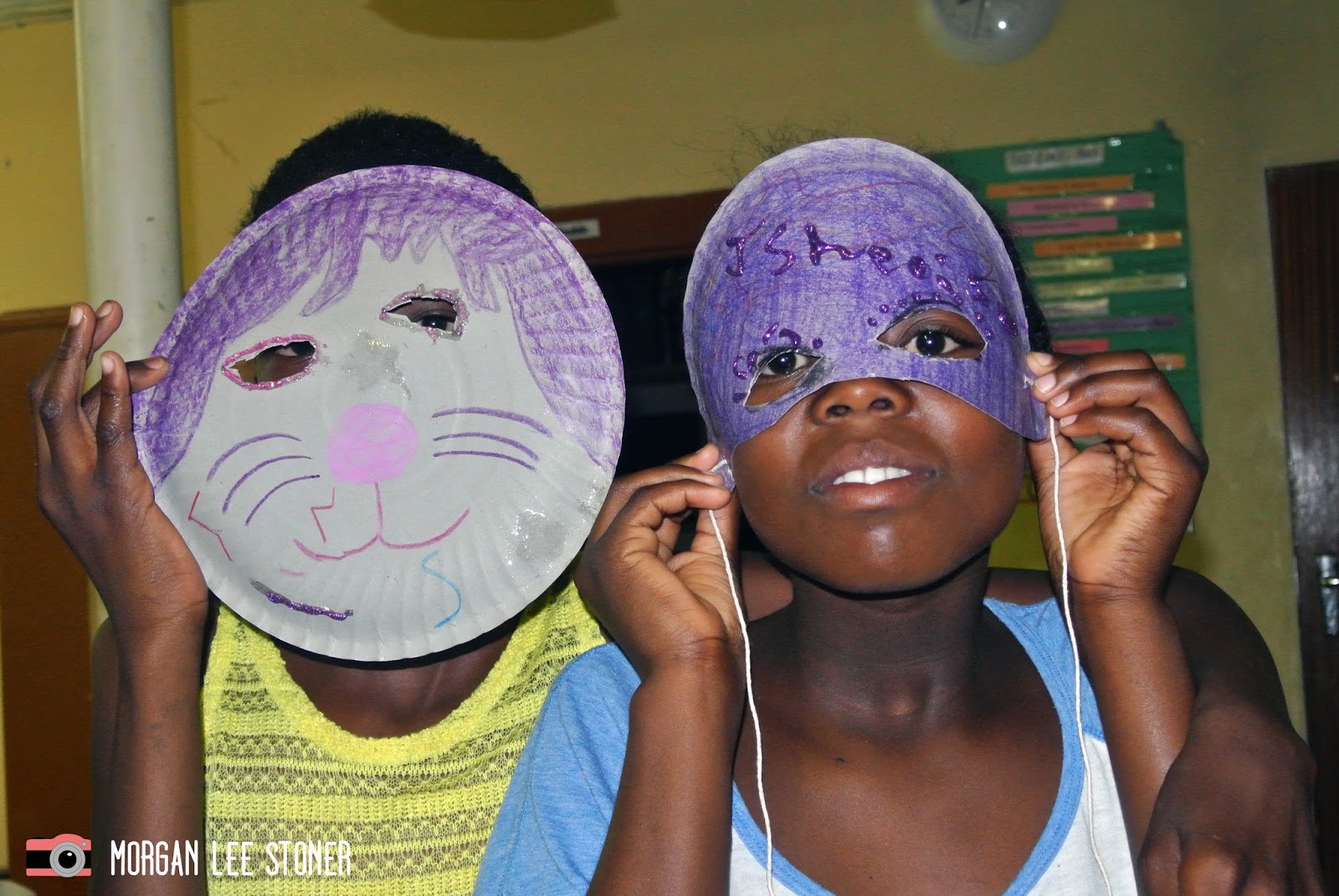 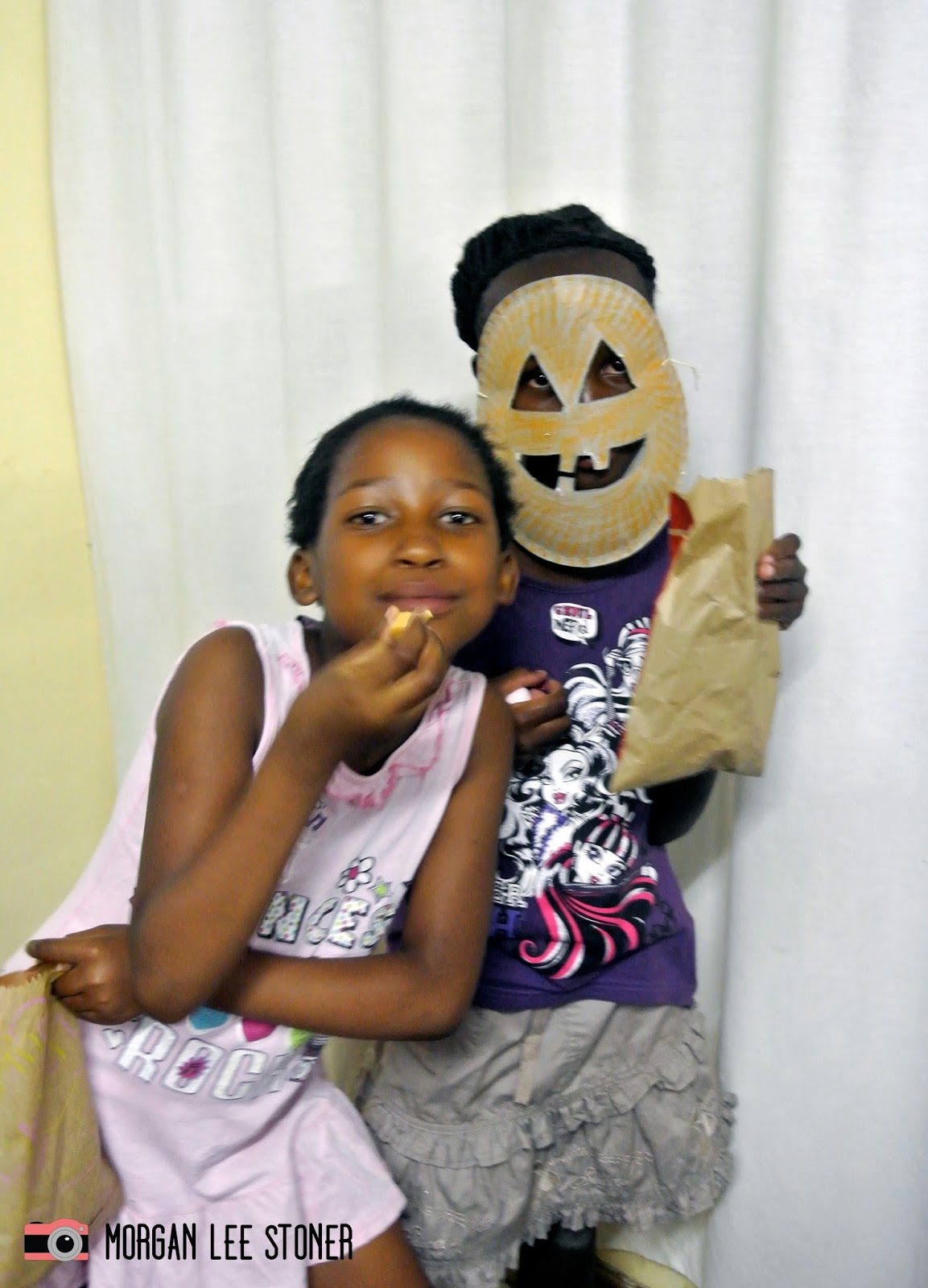 I wish I took more pictures, but chaperoning 16 sugar-high kids doesn’t leave much opportunity for photography. What I didn’t photograph was the awesome set up Jess and I came up with to play a Halloween movie; it involved a projector, gigantic speakers, and paper taped to a wall. Many high-fives were doled out after that accomplishment. I also didn’t get a chance to photograph the Rice Krispy Treats we made (and that’s probably for the best since they turned out… interesting), but the kids loved them and that’s all that matters.  And I didn’t get to capture the moment of utter chaos when we set up fake houses throughout the centre and the kids raced from one “house” to the next screaming “TRICK OR TREAT!” and collecting candy.

There was also no way to capture our frustration toward the giggling, rebellious kids keeping us up past midnight despite our many attempts to calm them down, nor the utter sleep deprivation we felt when the kids woke us up at 6:05 IN THE MORNING!

The Mystery of the Disappearing Axe: When we woke up on Halloween morning, we discovered an old, metal ax lying right outside the door to the centre. No one knows how it got there and it definitely wasn’t there the night before when we locked up and went to sleep. After discovering the axe in the morning, we went back inside for no more than 5 minutes, and when we came back out, the axe was gone! Jess and I were the only ones who seemed concerned, but I think we have a Halloween mystery on our hands.

Lastly, I want to thank Godi, Kagiso and my fellow PCV, Jess for helping with the party, ya'll saved my ass more than once haha (FYI, all pics were taken by me or Jess using Jess's camera).

I don’t know if I’ll do another lock-in anytime soon, but I had a ton of fun celebrating Halloween with my kiddos and introducing them to my favorite American holiday!

P.S. The day after Halloween (November 1) is my half-birthday! Gifts of any kind are appreciated; gifts of money are preferred ;)