I’ve written a bit on my blog about Zazi, a program that Peace Corps Volunteers implement to teach young women and adolescent girls about sex and other health topics, but until now I haven’t gone into great detail.

Well, I ran a Zazi program in my village and I brought ya’ll along for the ride! 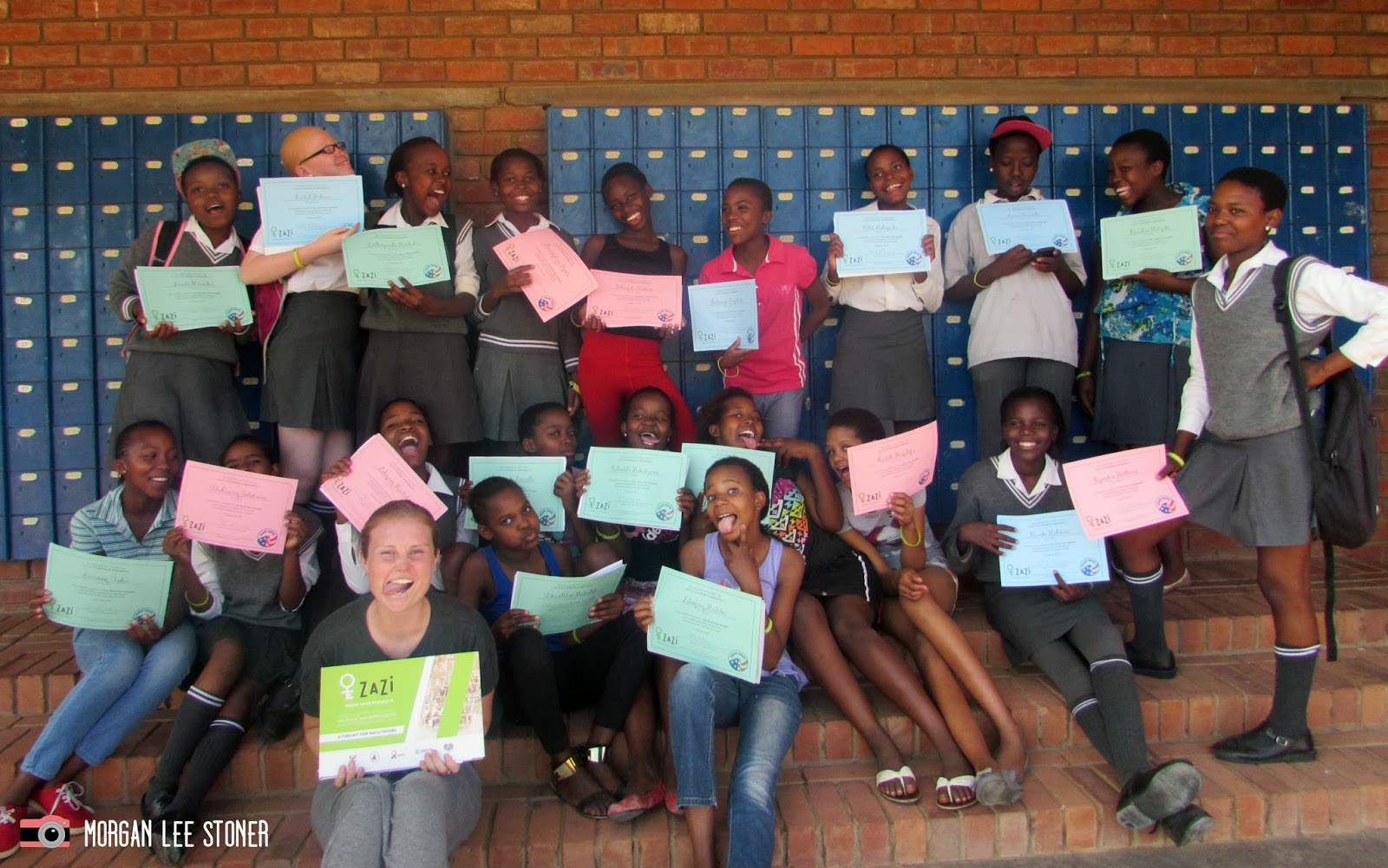 Zazi is a program for South African women, created by South African women. Zazi was originally designed for girls 15 and older, but I believe in positive intervention at a early age, because stopping negative behavior before it starts is a lot easier than trying to change existing negative behavior, so I set up my Zazi program for middle school girls, ages 12-15. Whether we like it or not, girls are having sex at young ages and they need to know this information before they contract HIV or fall pregnant (the South African way to say it).

Please check out the Zazi website, www.zazi.org.za for more information! 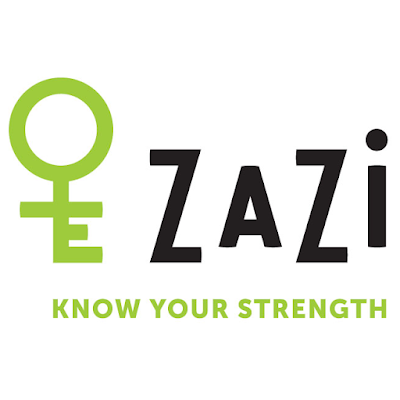 Most of the kids who come to the centre are primary school age, but there are about 5 middle school girls who come on a regular basis. I started by telling them about the program and giving them permission slips for their parents to sign (it’s important to make sure that the community is on board with the program). I told them if they had any friends they thought would enjoy the program to invite them as well. Well, word spread fast because my Zazi group had 20 graduates!

We started meeting Wednesday at the centre from 4-5 p.m (although that eventually changed to Tuesday). This was the schedule and the topics that we covered:

All lesson plans come from the Zazi Toolkit, which you can find here

Counterpart
My counterpart for Zazi was Godiragetse. If you remember, my other counterpart is Kagiso, but since this is a girl’s group, I thought I’d bring in a girl. Godiragetse lives in a nearby village and she originally attended IST as Colleen’s counterpart. However, after Colleen et’d, I didn’t want all of Godiragetse’s training to go to waste, plus she’s a great counterpart!

As I’ve said countless times, Peace Corps aims for sustainability and community involvement, which is why we run all our programs with counterparts. My goal was to start running the program myself with Godi’s help, and eventually transition so that she ran every session and I simply aided her when needed.

The girls love Godi and she related to them on a cultural level in a way that I simply can’t. She was also totally comfortable talking to the girls about sensitive subjects (sex, condoms, puberty, etc.), which is not always common in small South African villages. I also greatly appreciated her ability to translate when the girls didn’t understand a word, or when I got ahead of myself and spoke too quickly.

The language barrier will always be a challenge throughout my service, but like I said, Godi was a great translator.

Condoms: I didn’t have trouble talking to the girls about condoms and sex; they participated and rarely giggled, but trying to physically hand them condoms to take home was impossible. They simply refused. They claimed that their parents would be furious (even though their parents knew about Zazi and signed a permission form) and even when I offered to talk to their parents; they shuddered at the idea of taking condoms. Even when I tried, “if you aren’t having sex, you should still have them around just in case. What if a friend needs one?”, they declined. I eventually convinced most of the girls to take some (simply by sheer will) but I’m pretty sure they threw them in the trash on their way home. Breaking the cultural barrier and taboo that society places on condoms is going to be a challenge, especially since condoms are seen as the male's responsibility. Any advice is greatly appreciated. 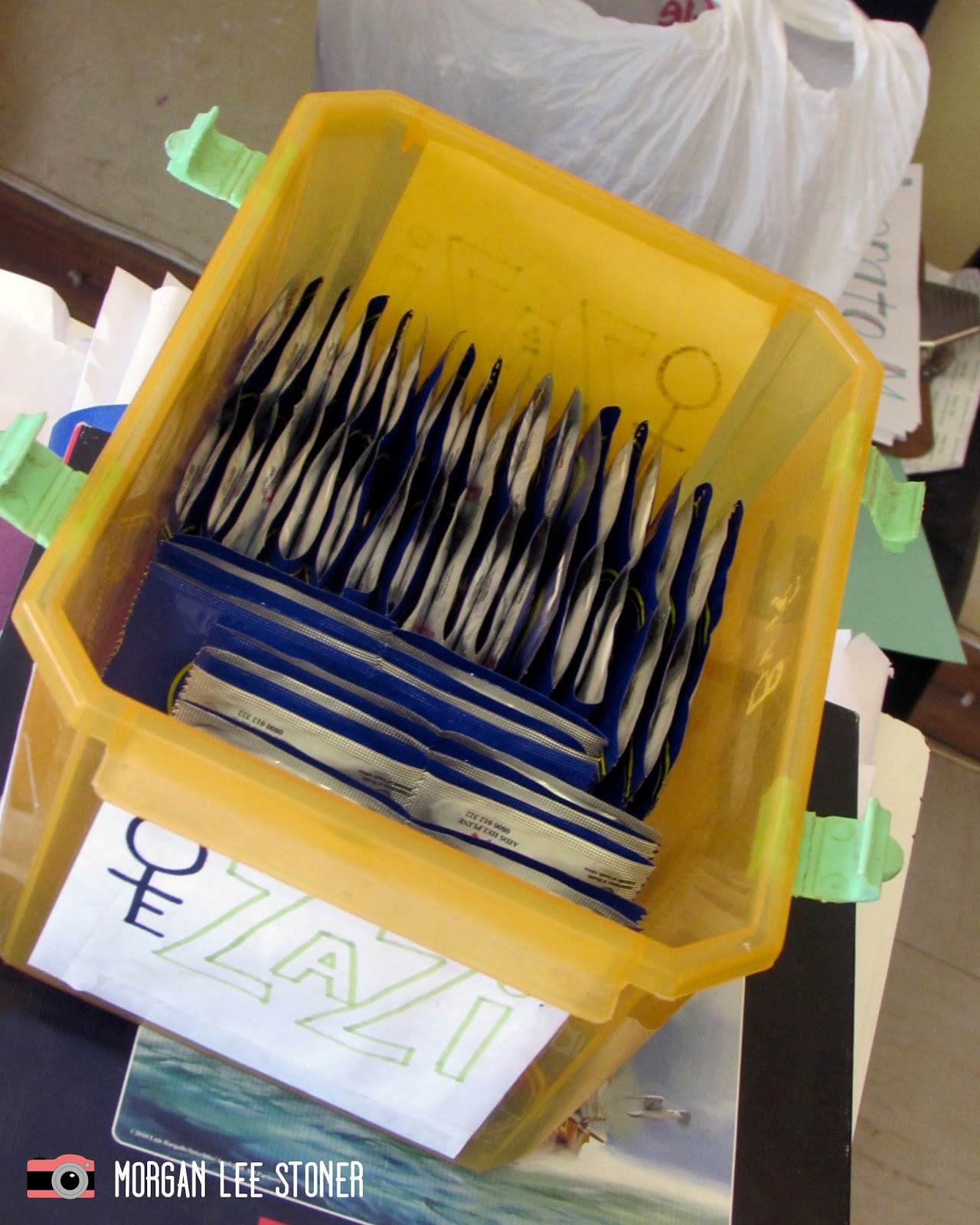 Accountability: Girls were frequently late to the lessons because of the concept of “South Africa” time. They aren’t necessarily trying to be rude (as an American might see it), punctuality simply isn’t a high priority in the village. Also, girls might miss a lesson without telling me ahead of time, which was a requirement of the course. Honestly, I don’t think they’ve been held accountable to a program like this before, so they don’t realize the consequences.

Entitlement: This is a complicated thing to talk about, but I’ll do my best to do so in a sensitive way. I am a white American; therefore, I am rich. That is the mentality of the children at my org and the girls in my Zazi. If I run a girls group for them, they want snacks and gifts, and if one day I don’t bring something, they get snotty. They assume that because I am a volunteer from America, I am here to provide them things for free, which is actually the opposite. I don’t have a lot of money (I make approximately 206 USD per month) and if I do manage to get a grant for a fun trip or project, the children need to earn the right to attend.

The boys at my org are jealous that they don’t have a special weekly meeting, and they express that jealousy by peering in the windows and making a ruckus during lessons. I think I finally have the situation under control, and don’t worry; Kagiso and I are working on starting a boy’s group as well.

Tip: keep a box in the room so the girls can anonymously submit questions they don't feel comfortable asking in front of the group.

Zazi Sleepover
For some reason I thought it would be fun to have a sleepover and tackle two lessons in one night. It went surprisingly well, but I don’t know why I keep subjecting myself to all-nighters with hyped up kids haha. 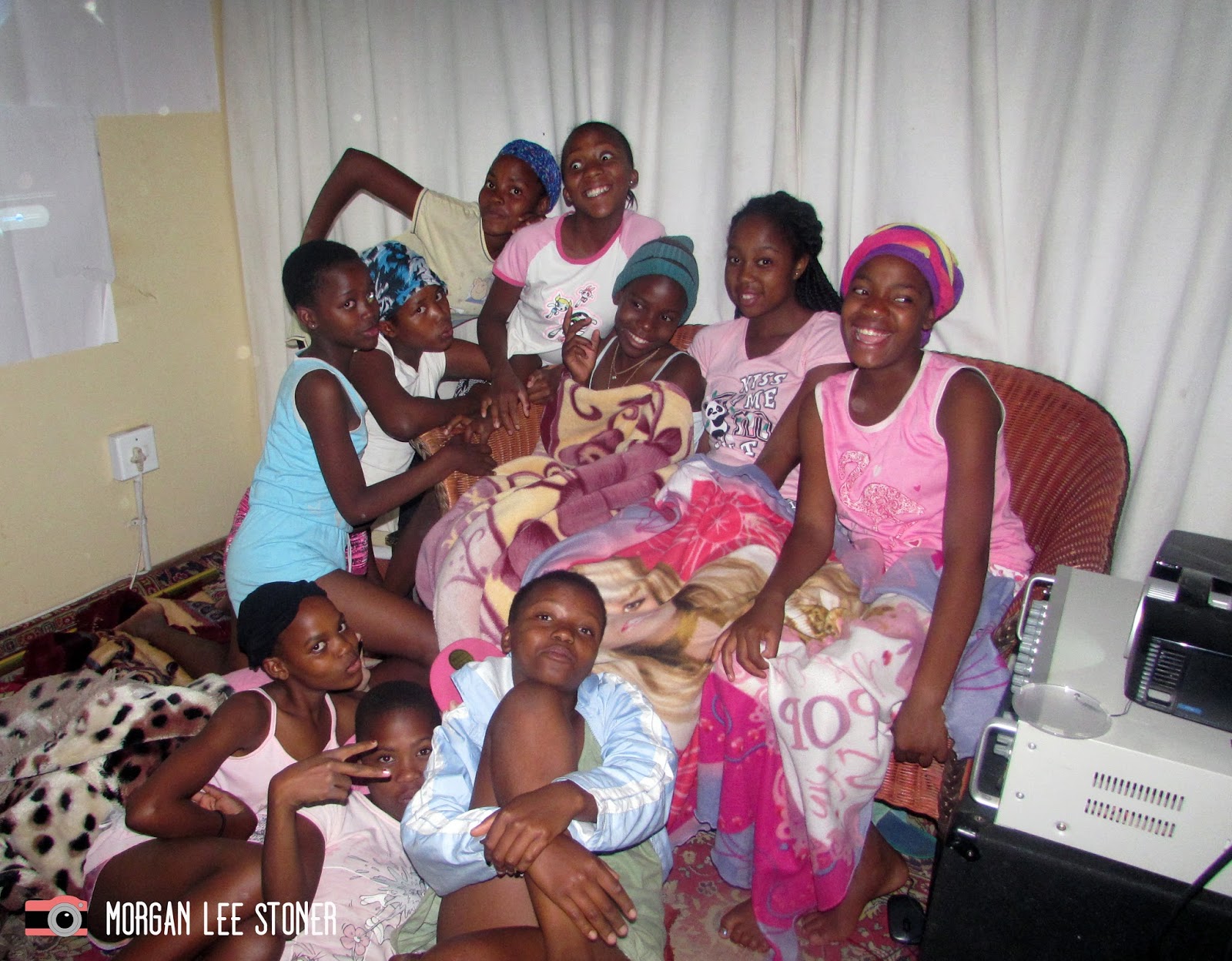 Monitoring & Evaluation
Peace Corps stresses that all of our programs are evidence-based, that’s why M&E (monitoring and evaluation) is very important. At the beginning of the Zazi program I gave the girls a pre-test to see what they already know, and at the end of the program they take the same test to see what they have learned. I am happy to report that they improved on every question! 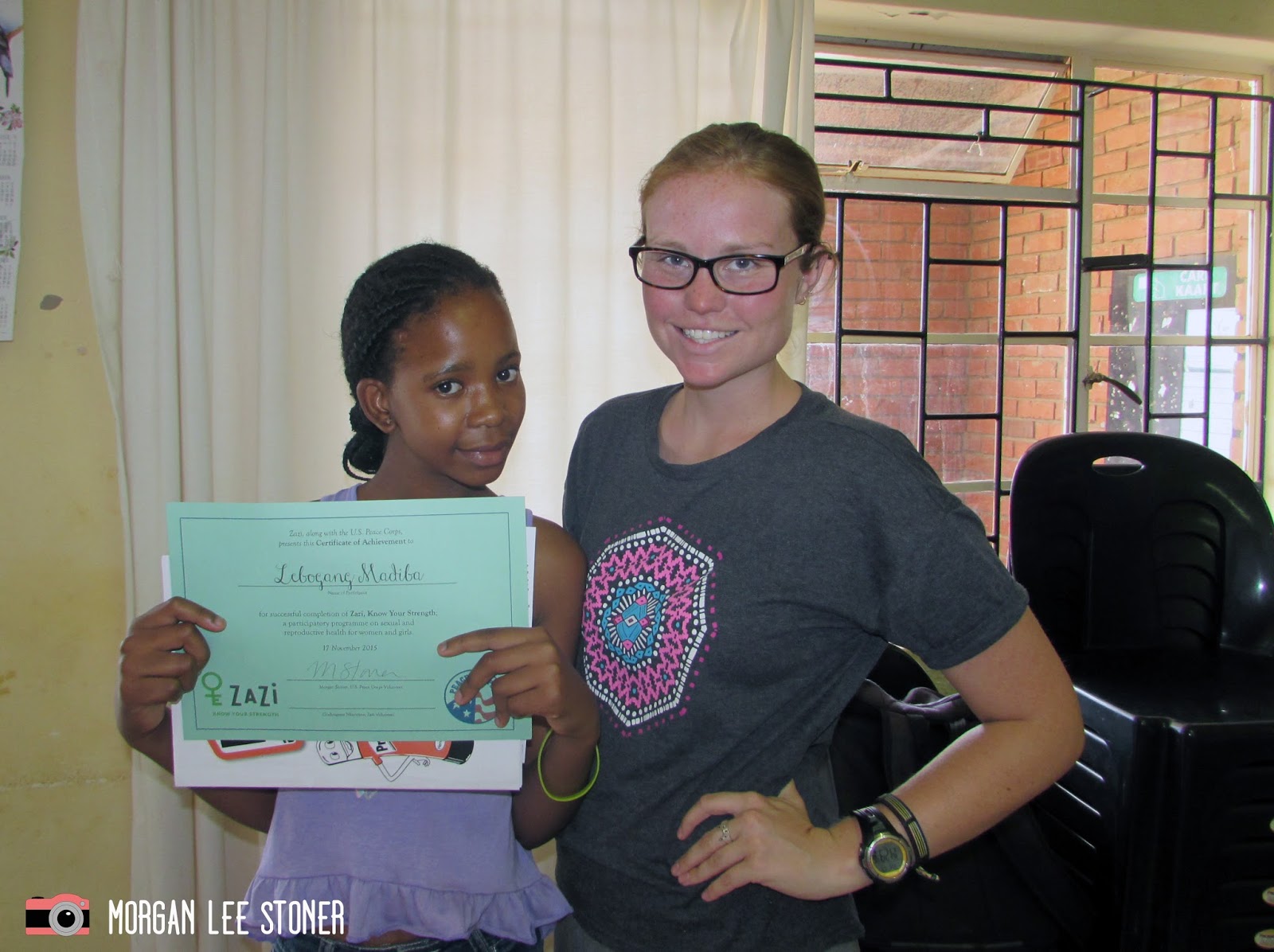 My first Zazi program was chaotic, to say they least, and I didn’t always feel like I was doing the best job possible, but the girls enjoyed it, I had a lot of fun and we all learned a lot. Now I have a better idea about how to successfully run a Zazi program and I think my next Zazi group will be even better.