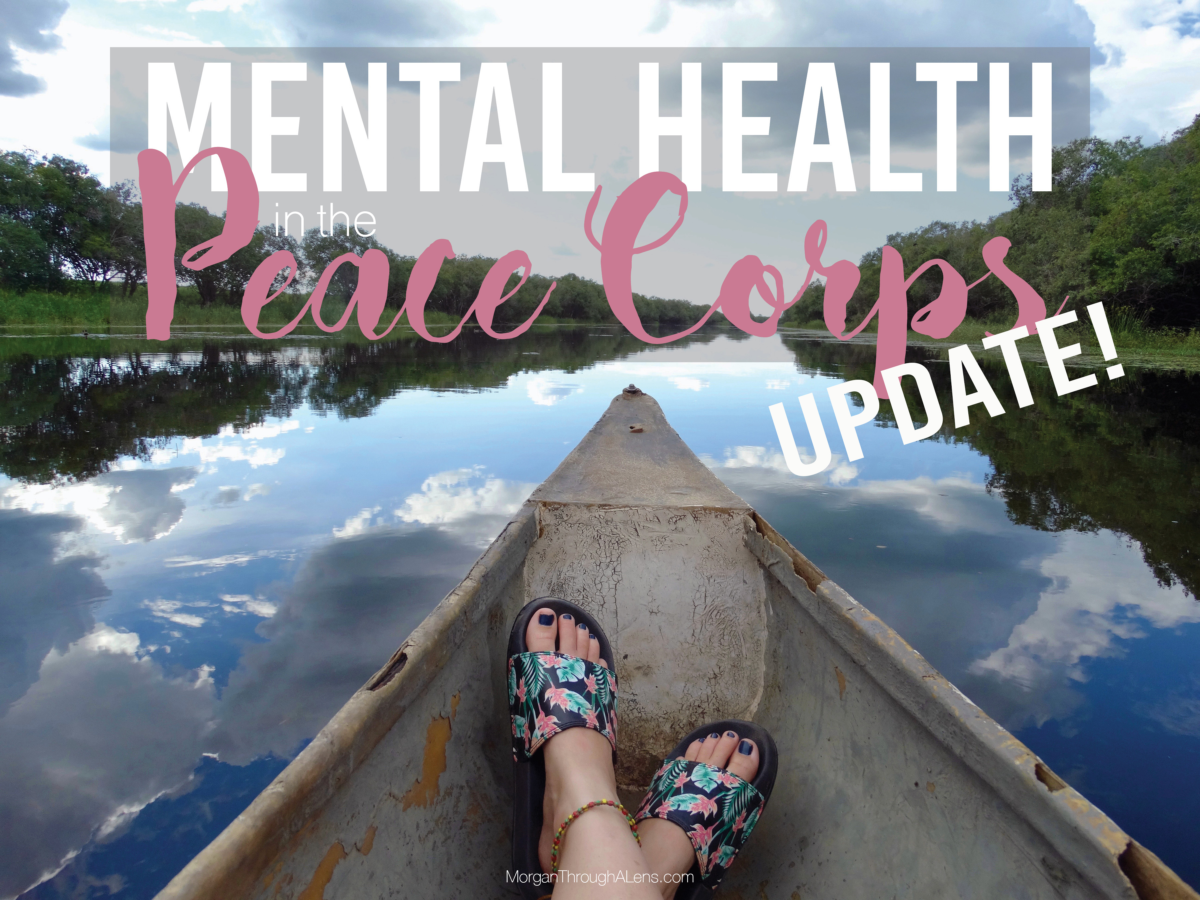 I first wrote about Mental Health in the Peace Corps over a year ago while I was still in the midst of my Peace Corps service. That post is easily my most popular blog post and has surpassed 1300 views to date. Since publishing it, I’ve received countless comments, emails, Facebook messages, etc. from people either thanking me for writing about mental health as a PCV, or asking me questions on the subject. A few people even suggested that I write an update to the original post: Did I struggle with mental health during the last year of my service? Do other volunteers feel the same way? How has Peace Corps’ approach to mental health changed in the last year?

Well, the time has come… an update on mental health in the Peace Corps.

An update on my mental health

Since writing the original post, I’ve decided to stop taking anti-anxiety medication. I know, I’m freaking out too. Especially since 11 months ago I was increasing my medication dosage. Peace Corps wasn’t always easy for me. The good times were amazing because I was living a new life that I had never imagined; seeing new things, meeting new people, and having “pinch-me” moments quite regularly. But the bad times were terrible because I was completely cut-off from my established support system and coping mechanisms. In September of last year, I was encouraged by Peace Corps to increase my medication from 100mg to 150mg daily; mostly because I was having a lot of sleeping problems that Peace Corps medical staff assumed were anxiety-related.

I don’t want to go into a ton of detail about my choice to stop taking medication because it doesn’t seem that important. Why I decided to stop taking meds should not influence whether or not you take meds – it’s such a personal, intimate decision that no one can make for you. However, I will say that if you want to go off your anti-anxiety medication, do so under the supervision of a therapist or psychiatrist – preferably one who knows your history.

I won’t lie, it hasn’t been easy. I’d been medicated for almost 5 years and adjusting back to a life without medication is bound to be difficult, but I’m taking it day by day and reminding myself that it’s a process and it takes time.

Many people want to know whether or not I suffered with anxiety during my last year of service (after writing the original blog post), and the answer is… of course I did! Honestly, I am willing to bet that every Peace Corps volunteer suffers anxiety at some point during their service. Obviously I don’t know that for sure, but based on my conversations with fellow volunteers I am confident in that statement. What’s different about Peace Corps is that you are expected to struggle. In college, if I tried to open up about my anxiety, people didn’t always understand. Morgan, you are a good student, you have great friends, you live in Miami, you go to the beach on the weekends, you have a job lined up after graduation, what do you have to be anxious about? But in PC if I opened up about anxiety, people where much more empathic. Of course you’re anxious! You moved halfway across the world to volunteer in the HIV field! It helped that everyone around me was also feeling some degree of anxiety, but as you know, anxiety in either situation is completely valid. During Peace Corps, I felt much more comfortable sharing my struggles with anxiety because people almost expected me to feel anxious. Now, I’m not so sure.

How do other volunteers feel about mental health in the Peace Corps?

Last time I wrote about mental health, I did so completely from my own perspective. This time, I decided to reach out to current and returned volunteers to learn how they feel about Peace Corps’ approach to mental health.

The general consensus is that Peace Corps* does a pretty good job addressing mental health. During training, Peace Corps medical staff runs multiple sessions about maintaining mental health throughout service, coping mechanisms, and options for volunteers who are struggling. Peace Corps offers therapy for volunteers and even provides anti-anxiety medications for volunteers (whether or not they were previously on medication). I remember a time in September 2016 when my anxiety was at an all-time high. I took the two-hour taxi ride to Pretoria, walked into the Peace Corps Medical Office and just started crying. I was so worried that PC staff would want to send me home because I wasn’t coping well, but instead, they offered to let me stay in Pretoria for a few days to regroup, relax, and recover, and then meet again to discuss my options. After three days in Pretoria, I felt a lot better and was able to return to my village and continue my work. The possibility of me going home wasn’t even mentioned. I appreciate Peace Corps’ sympathy during that time.

I spoke to a returned volunteer who believes (and I agree) that alcohol is a huge coping mechanism for volunteers and as a result, many people develop an alcohol dependency during their service. Peace Corps does try to address this during trainings, but it’s hard to monitor what people are doing at site from hundreds of miles away. I actually believe more people are sent home due to alcohol issues than mental health issues (I can think of two off the top of my head). As I mentioned in my previous post, I made the conscious decision not to drink alcohol at site for this reason precisely. I warn future Peace Corps volunteers to be careful about using alcohol as a coping mechanism during their service (or really anytime in life).

A current volunteer I spoke to mentioned a desire for a better mental health screening system for incoming volunteers. During the PC application process applicants are required to submit a list of current medications (directly from the pharmacy) so PC knew I was on anti-anxiety medications, which is why they required a lot of follow-up (letters from my therapist and psychiatrist, for example). But I can imagine that some people are better at hiding their anxiety/depression/mental health issues during the application process and therefore end up in-country even though they may not be ready to serve.

There were three instances during my service when volunteers had what can only be described as mental health break downs. I do not know their personal history with mental health nor Peace Corps’ knowledge of their mental health issues prior to these instances, and it would be highly irresponsible of me to make assumptions, but perhaps better screening during the application process could have saved these volunteers a lot of pain and suffering. Or maybe they didn’t receive the support they needed during the difficult times – either because they didn’t ask for help, because PC medical didn’t notice the warning signs, or because they didn’t take the warning signs seriously. These instances are few and far between, but regardless, no one deserves to go through a situation like this.

To be fair, thousands of people join Peace Corps each year and it is inevitable that some people are going to fall through the cracks and join Peace Corps when they are not ready, but that’s where services in-country come into play. That being said, PC is a large organization and they can’t babysit every volunteer, especially when volunteers are spread out miles and miles apart in rural areas of developing countries. I think Peace Corps does the best they can given the uniqueness of the situation.

How has Peace Corps’ approach changed?

As I said, since writing the original post, I’ve been contacted by many people either considering joining Peace Corps or in the application process. The impression I’ve gained is that Peace Corps is actually getting stricter about mental health requirements for incoming volunteers. I’ve spoken to a few people who were denied entry because of mental health issues – but I believe it might be because their issues are new. Prior to Peace Corps, I was on medication and in therapy for 2.5 years so I was well-versed in anxiety.

Since my last blog post, I had the opportunity to speak to an OIG officer. OIG is the Office of the Inspector General, a third-party organization “to prevent fraud, waste, abuse, and mismanagement and to promote effectiveness and efficiency in [Peace Corps]”. Based on our short conversation, mental health is an issue in EVERY SINGLE Peace Corps country, and it’s an issue that PC Headquarters is working hard to address. I’m not sure exactly what approaches they are taking, but I want you to know that the problem is not going ignored.

Thank you so much for reading this (somewhat scattered) post. I cannot tell you how much I appreciate everyone who takes part in the mental health discussion. Change can only happen if we all work together. Sometimes the worst part about anxiety is feeling alone like no one understands what you are going through, but I want you to know that you are never alone. If you have any questions or comments please don’t hesitate to reach out.

Do you have any other questions about mental health in the Peace Corps? Let me know in the comments!