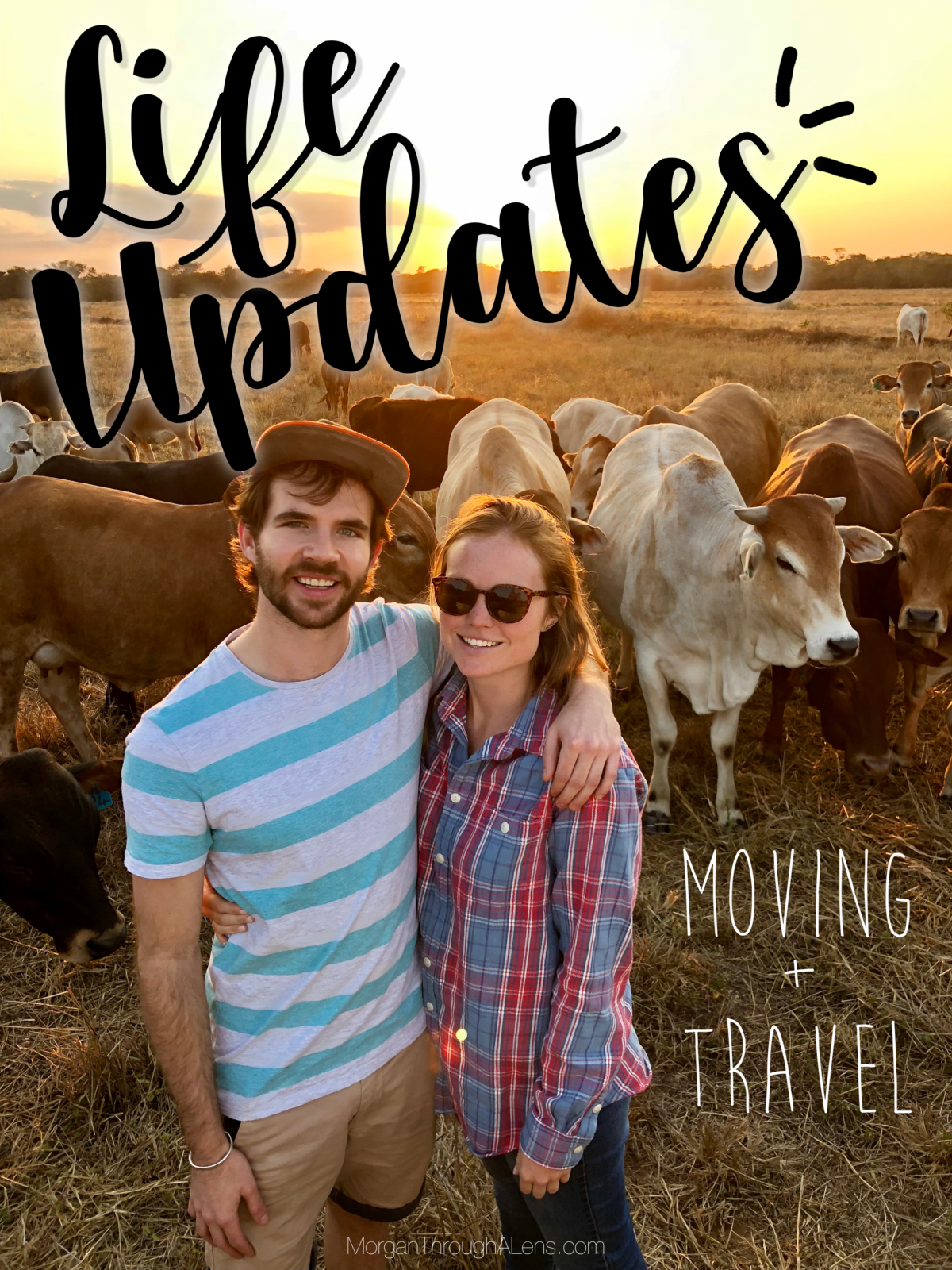 I know, I know… I haven’t blogged in 6 months. I’ll explain why in a little bit, but basically, I’m here and ready to get back on the metaphorical horse.

I have some awesome blog posts planned, but before you see those, I wanted to give you a quick update on where I’ve been and what I’ve been doing. So, if you give any f*cks at all, keep reading.

I MOVED TO PORT ELIZABETH!

Last I updated you, I was living in Pretoria, about two hours away from my old village, and working as a teacher’s assistant. Well, now I live on the southern coast of South Africa in a small city called Port Elizabeth (PE). How did I get here? Basically, in October some crazy sh*t went down at my job and the company was closed down.

Anyway, right around that time, my boyfriend, Alex, got a job offer in Port Elizabeth, so in January we packed our bags and moved to PE. As I said in a previous post, Alex went to boarding school just outside PE in Grahamstown. His good friend still lives in PE so for the first three weeks we lived with his parents in their little garden cottage thingy. We finally found a flat on the 10th story of a building (11th story by American standards) with an incredible view of the city and ocean (best view in town, if you ask me).

As part of my visa requirements, I have to volunteer, so I found a gig doing communications and PR stuff for a place here in PE. I’ve just started this month (due to my travels in America and Zambia, which I’ll get to in a moment) so I don’t have much to say about it yet – but so far, so good!

I won’t lie, adjusting to life in PE was hard at first. Alex jumped headfirst into his new job and reconnecting with his old boarding school friends, but since my job is online (no, I’m not an online stripper), I struggled to make friends and do things outside the flat.

Part of me also felt like I was straying off my path. I stayed in South Africa after Peace Corps because I wasn’t ready to leave my community, I wasn’t ready to leave the work I was doing, and I wanted more experience before graduate school. But now I am hours and hours away from my old village, all my Peace Corps friends have left SA, and I had to delay graduate school for another year due to some unforeseen circumstances.

I was frustrated with myself for struggling so much, emotionally and mentally, with this move since normally I adjust really well to change. I moved 1200 miles away to university and didn’t know a single person. I spent a summer in NYC and moved without knowing anybody. And of course, I moved halfway around the world to join Peace Corps and didn’t even cry at the airport. So why was this move so hard? I think the other moves felt like I was leaving for a purpose. This move felt like I was leaving my purpose behind.

Well, it’s been over six months since we moved to PE (granted, almost three of those months I was traveling outside of SA, so can I really say I’ve lived here for that long?) but I’ve grown to like PE. It’s a cool city with a lot of outdoor activities and I LOVE living by the beach again. I’m still trying to find my stride and make friends, but it’s all coming together. I have a good routine going and now that I am working in the development sector again, I’ve gotten so much of my “purpose” back. I’m also learning to take advantage of this unique time in my life when I make more than enough money to support myself and only work part-time. I mean, when will I ever again have a job that lets me take unlimited leave to travel?? I’ll go to grad school next year when the time is right, but for now, I’m a PE girl.

THREE MONTHS OF TRAVEL AND 19 FLIGHTS?!

Skip ahead if you don’t care about visa stuff… My visa wasn’t set to expire until August 2018. However, that aforementioned “crazy sh*t” that went down at the orphanage in Pretoria resulted in some visa issues and I had to quickly leave the country. Luckily, Alex and I had already planned to visit his family in Zambia for Christmas, so we just left ASAP and spent over a month there.

When I came back to SA, I abandoned my visa (the one set to expire in August) and returned on a 90-day tourist visa. My new tourist visa was then set to expire on April 2nd (FYI, extending your stay past the expiration date is a big no-no). I had planned to go back to America in May because my college roommate was getting married on May 26th and my high school BFF on June 9th, but going back on April 2nd just to meet the visa deadline seemed ridiculous. After a lot of thought, I bit the bullet and decided to spend 10 weeks in America.

It actually ended up being a good move because I got to travel quite a bit, see a ton of people I hadn’t seen in a while, and spend quality time with some awesome folks. Obviously I missed Alex a lot, but “absence makes the heart grow fonder” blah blah blah 🙂 When I say I traveled a lot in April, May, and June, I mean it – I took 19 flights in 90 days. I hate flying. This sucked.

Here is the cliff-notes version of what I did while traveling:

KRISTEN’S WEDDING: My best friend from high school got married! I was a bridesmaid in her wedding on June 9th, and because of my early arrival, I got to go to her bachelorette party and bridal shower in May! Luckily all her wedding events were in St. Louis, which I still consider my home base, but I would have traveled anywhere to be there 🙂

SHANNON’S WEDDING: My roommate from college got married on May 26th in Palm Coast, Florida. I’d never been to Palm Coast, but my mom lives in Naples, Florida and it’s only about a 5-hour drive away. I got to see a lot of friends from college who I hadn’t seen in years!

PUERTO RICO: I spent some time with my Mom in Naples (she moved there when I was in college) but she also planned a trip to Puerto Rico with her side of the family meaning her husband, my sister, and my step-siblings. I loved Puerto Rico and it was a great way to travel somewhere new and exotic without actually leaving the States. I wrote an entire Travel Guide for Puerto Rico which you can check out here!

ST. LOUIS: STL just might be my favorite place. I did so much while I was there, like helping Kristen with the wedding, seeing friends and family, going to Forest Park, eating at all my favorite restaurants… but something that stands out a lot is Cardinal’s games. My dad is a season ticket holder. Not ticketS… ticket. He gets one ticket to each game haha. However, he always finds a way to get extra tickets so I went to a ton of games while I was in St. Louis. I adore the Cardinals and although I don’t follow them as much when I’m in SA, I love going to Busch Stadium any chance I get. Also, Danielle and I hadn’t seen each other in a year and the first place we met up? A cards game, duh!

P.S. My dad and I clearly need to take more pics together.

CHICAGO: The only place to get an SA visa is at an SA consulate and there happens to be one in Chicago where my BFF, Emma, lives! We got to spend four days together and explore Chicago. Side note, this photo was taken when Emma came to STL for the weekend. We failed at taking pics on my visit haha.

P.S. The SA consulate is a nightmare. If you are planning to apply for a visa, please message me. I have a lot of advice and trust me, you’ll need all the help you can get dealing with the consulate.

CHARLOTTE: Due to a crazy circumstance I had an overnight layover in Charlotte and I got to see my other BFF, Ryan!

I obviously did a lot more than just those things mentioned above, but geez, this post is getting ridiculous.

I got back to South Africa on June 12th and then a week and a half later I was back in the air headed to Zambia. Alex’s sister was visiting Zambia with her husband and their new(ish) baby. Alex hadn’t seen them in over two years and I hadn’t met them, so we jumped at the chance to go.

Alex’s mom lives in Lusaka, so we spent a lot of time there, but Alex grew up in a small farming town called Mazabuka, and Alex’s extended family still lives there, so we spent some time in Maz as well.

Alex’s niece turned 1 while we were in town so we got to be at her first birthday, which was great!

WHY DID I STOP BLOGGING?

I stopped posting on my blog and YouTube channel for a couple of reasons. The main one being: I don’t feel like I have anything cool to say anymore. I started posting when I was in Peace Corps because I was doing something that I deemed cool and I wanted to share my experiences and help others applying to Peace Corps. Now that I am just a private citizen living in SA, my life feels a lot less cool. However, after talking to some friends back in the States, they convinced me that my life just might be worthy of the occasional blog post and/or video.

Secondly, I have major hard drive and technology issues. I’ve lost a lot of photos and footage over the past 9 or so months. It’s very disheartening and really discourages me from filming/taking photos because I feel like it’s a lot of work just to lose everything to hard drive problems.

Lastly, I’ve received a couple of “hate” comments on my YouTube channel. Not about anything in particular, and they really don’t have any validity, but it makes me nervous to start posting more regularly and open myself up to more “hate”. I know, “haters gonna hate” but it’s a lot easier when they are hating on someone else.

This is my last little update before I let y’all go. On February 15th, I lost my precious dog Carter to old age. He was my baby for 16 years and although he lived a long life, it was so sad to see him go, especially because I wasn’t there to say goodbye. Then less than 5 months later, Nellie died in a bad accident. Her death was harder to deal with because it was so unexpected and so soon after Carter. And of course, I’d be remiss not to mention our handsome boy, Chase, who died last year. While grieving these losses, we have a new puppy to spoil, Stella. I haven’t met her yet, but she’s pretty darn cute.

What have you been up to? Let me know in the comments!
If you want more regular life updates, follow me on Instagram!

Why I chose not to study abroad