Vieques is a small island off the coast of Puerto Rico known for its bioluminescent bay, scuba diving, and wild horses that roam the streets and beaches. We spent the most time here and these are some of my favorite Vieques highlights:

1. Ride in a tiny plane from the main island

We took a small prop plane from the main island of Puerto Rico to Vieques and it was so cool seeing the island from above. 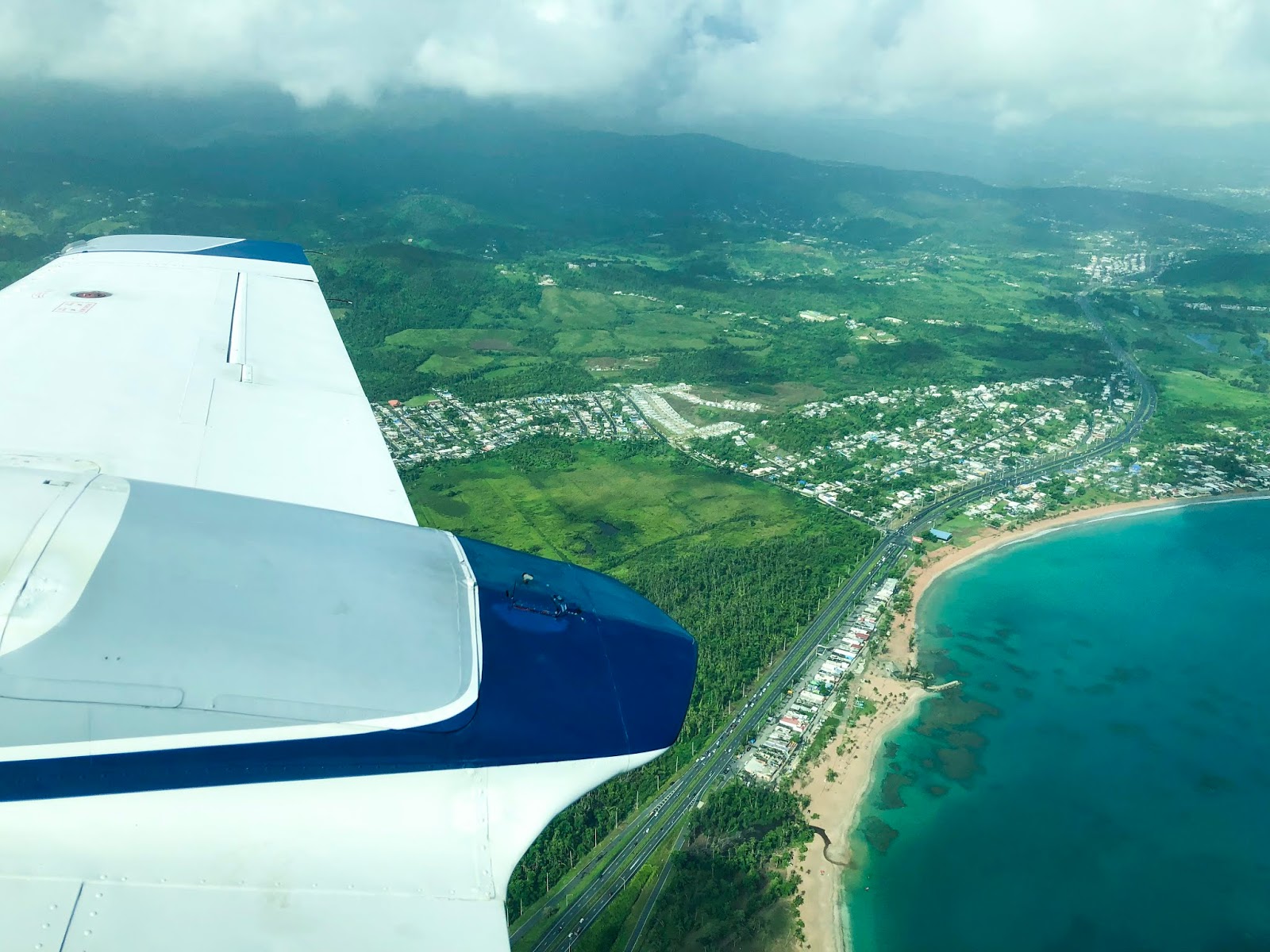 The scuba diving in Vieques was incredible! We dove under Mosquito Pier, and the wildlife was astonishing. Instead of a reef along the ocean floor, this reef was growing up along the concrete pillars of the pier beneath the water so we could zigzag through the wildlife. Tagged sea turtles swam between our legs, we saw rays, crabs, jellyfish, pufferfish, and fish I didn't even know existed. I wish I had pictures from this dive but unfortunately, we didn't have an underwater camera at the time. We dove with Black Beard Sports and they were awesome! The video below is from their site and shows the dive at Mosquito Pier.

Again, I don't have any pictures from this experience because a standard camera can't quite capture this natural phenomenon, but there are some awesome pictures on the internet. The tour with Kayaking Puerto Rico left after dark and we kayaked our way around Mosquito Bay in glass-bottom kayaks. At first, I was not convinced that we were going to see anything, but all of a sudden the water started glowing blue as we paddled. Apparently, disturbances in the water cause the flagellates (micro-organisms) to light up. Honestly, the phenomenon is hard to describe, but it's what I imagine the inside of a glow stick to look like if you were to pour it into the water. Even if the flagellates didn't light up, the whole experience might still be worth it just because of how many stars and constellations we saw. P.S. beware of rogue fish jumping into your kayak.


4. Spend the day exploring the island on golf carts

One of my favorite parts of Vieques was the semi-tame horses that roam all over the island. Although we were told that each horse is owned by someone (they just don't have pastures to hold the horses) they seemed wild to me. Apparently, each horse is tagged or branded by the owner. When the owner decides he or she needs their horse back, the pay a local child to roam around the island, find the horse, and return it. People walk around with small foam, make-shift saddles for times when they need to jump on the nearest horse and take a ride. 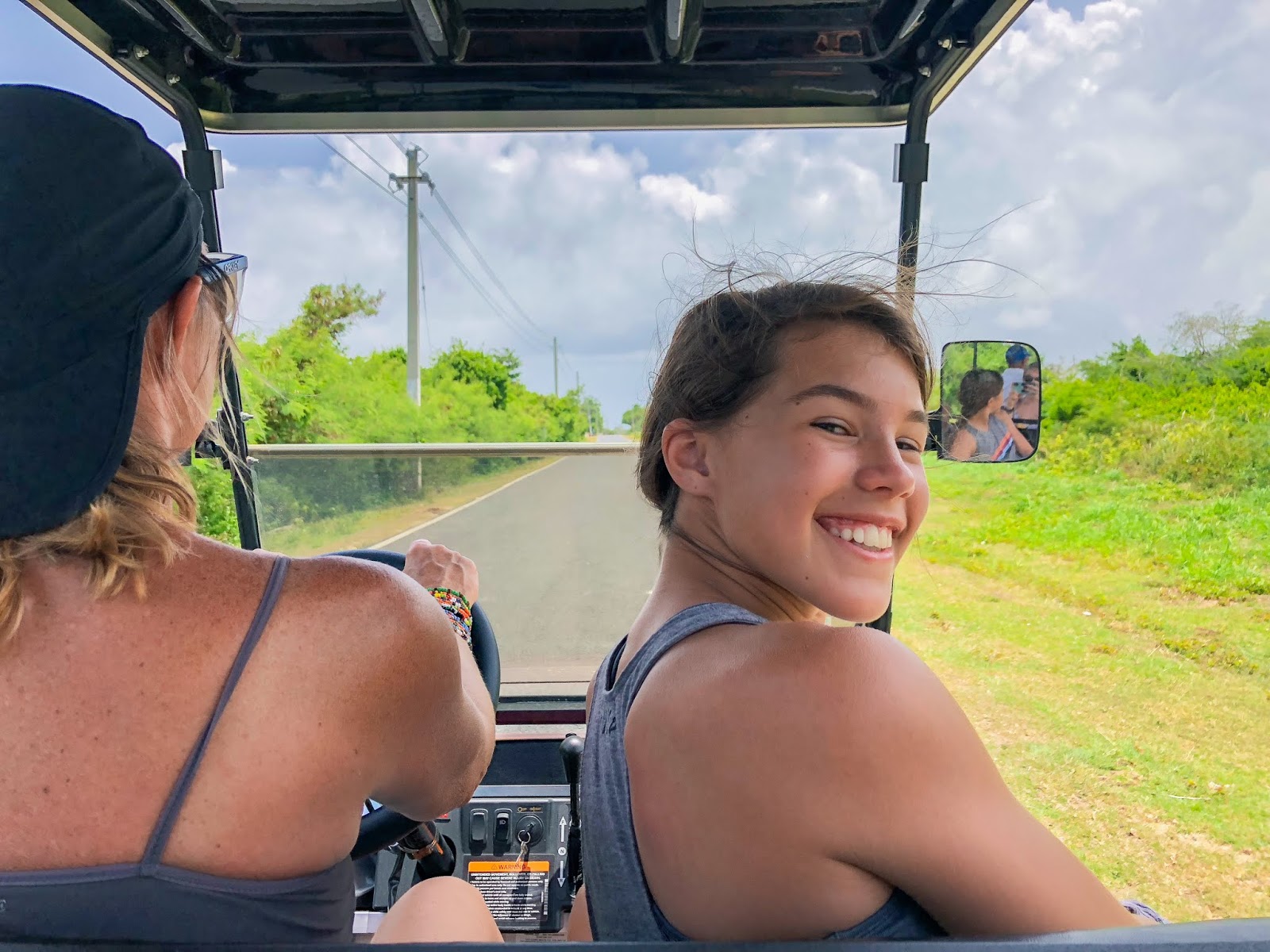 Culebra is another small island off the coast of Puerto Rico (although geographically part of the Virgin Islands, who knew?!) known for its clear waters and white sand beaches. Culebra is small and sparsely populated, but great for day trips!

1. Take a ferry to Culebra

Culebra is about an hour ferry ride from Fajardo, on the main island, and it was a cool experience riding with the locals who were headed to the island for a beach day. 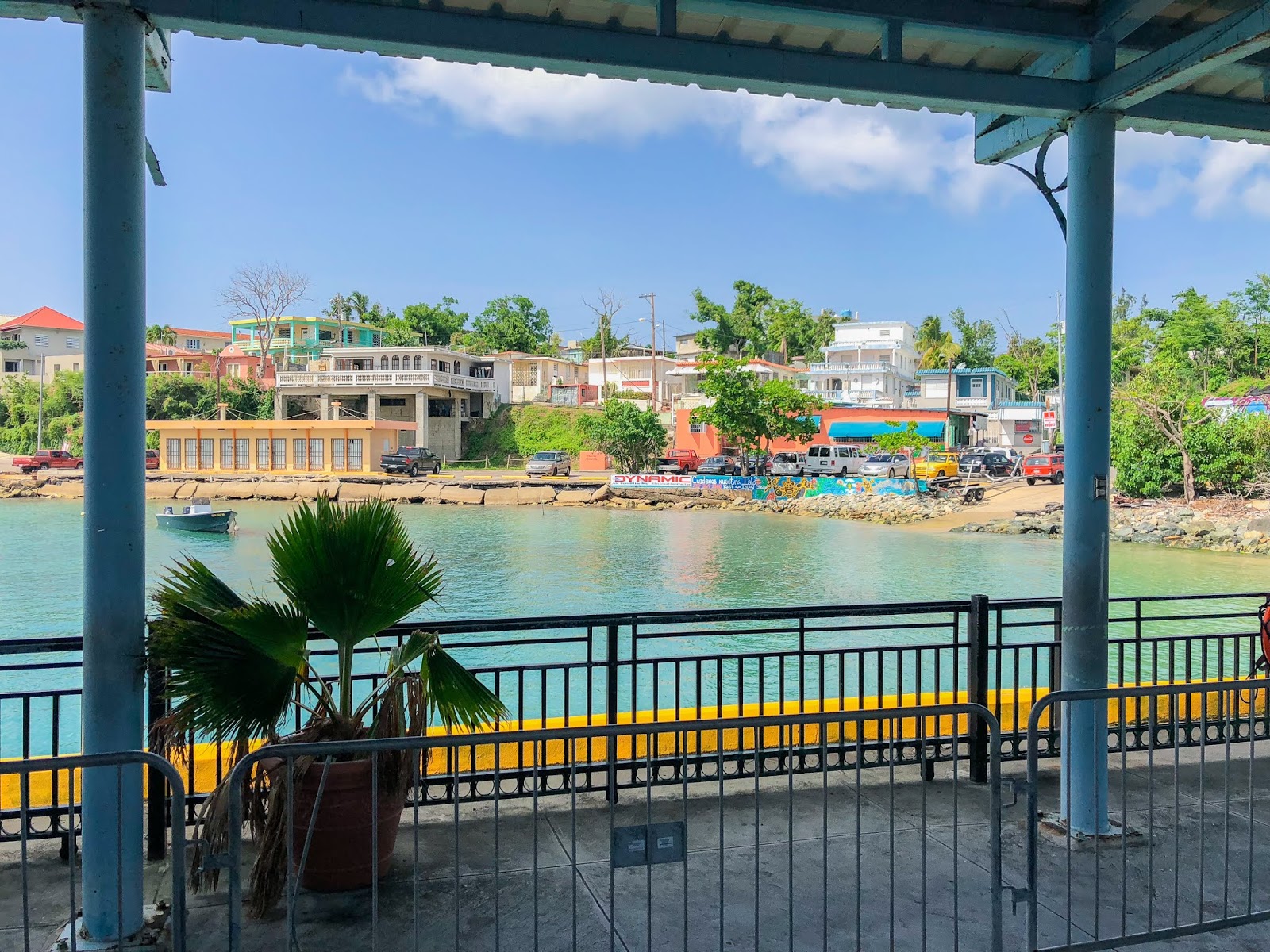 The pictures definitely don't do this experience justice. We went out on kayaks and our guides from Kayaking Puerto Rico led us around the bay, stopping to snorkel and mingle with the wildlife. 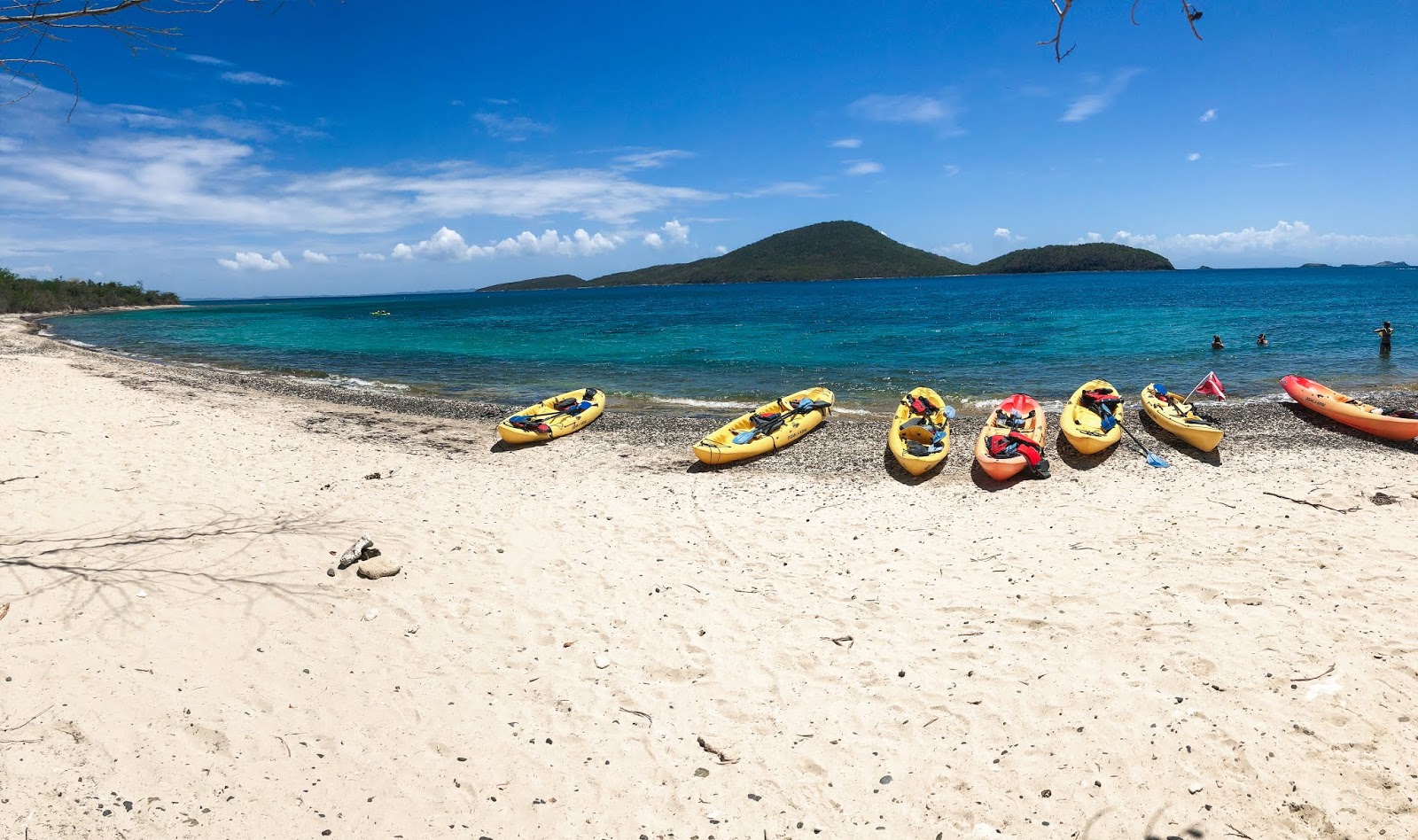 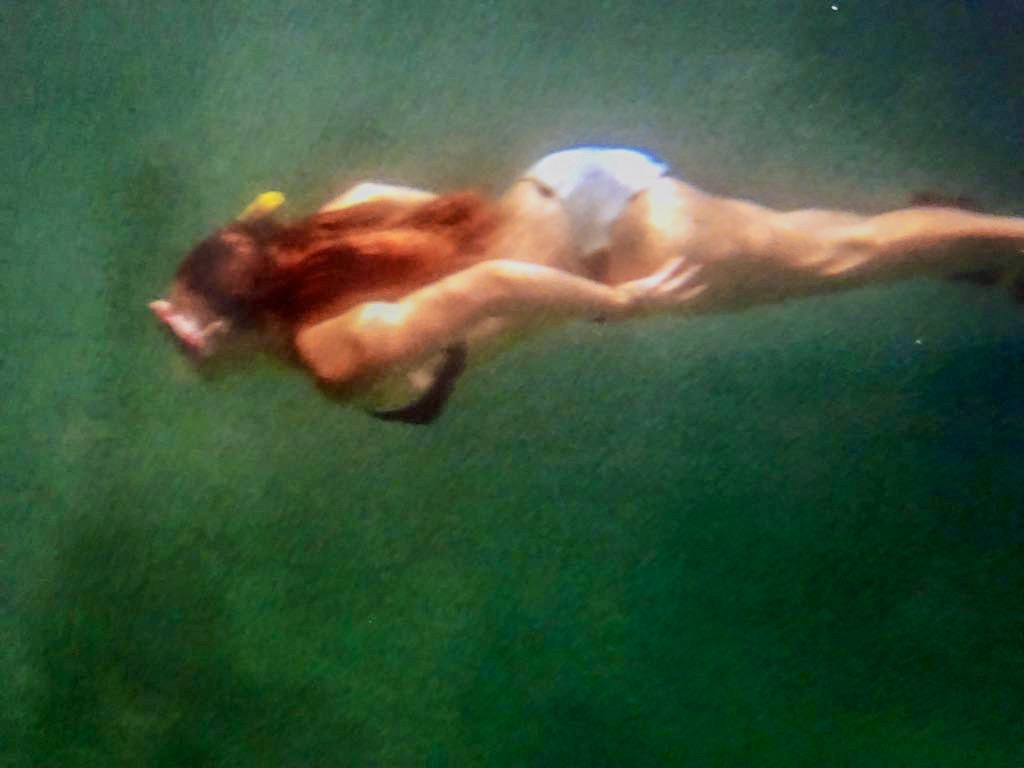 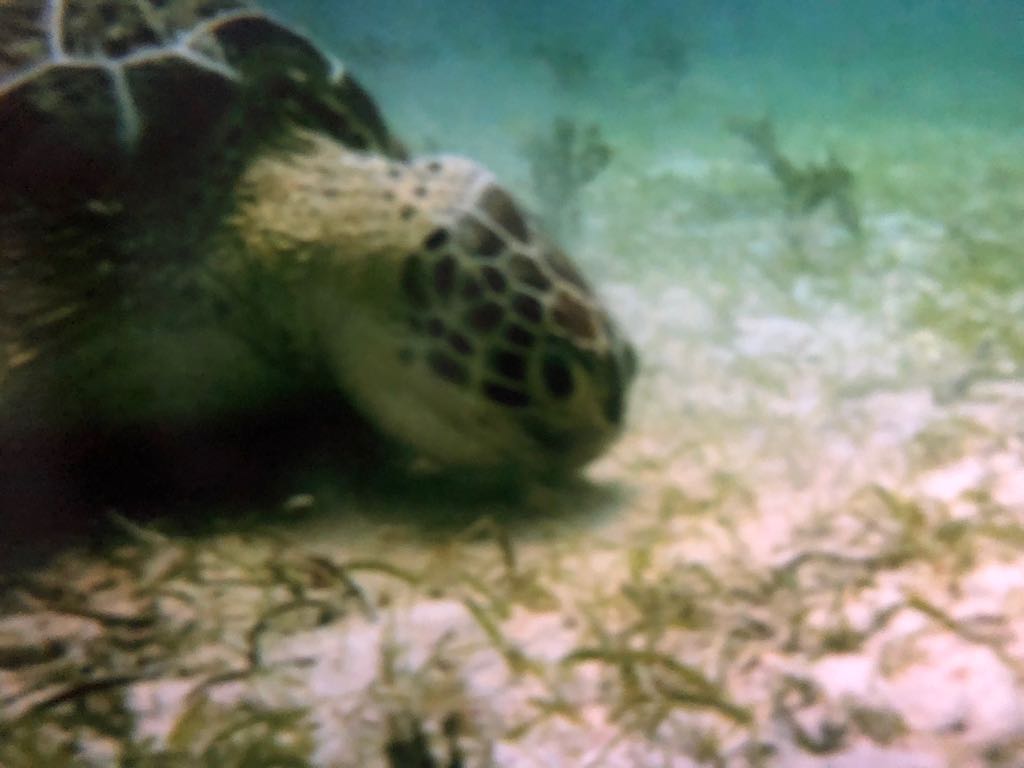 San Juan and the main island

The main island has a lot to offer; great restaurants, nightlife, and historical/cultural experiences. Although we didn't spend as much time on the mainland, here are our favorite activities:

When I say "island" what I really mean is "large sandbank". I must say, it was pretty awesome driving our own dingy between different reefs, islands, and swimming spots. We used Kayaking Puerto Rico again for this outing. 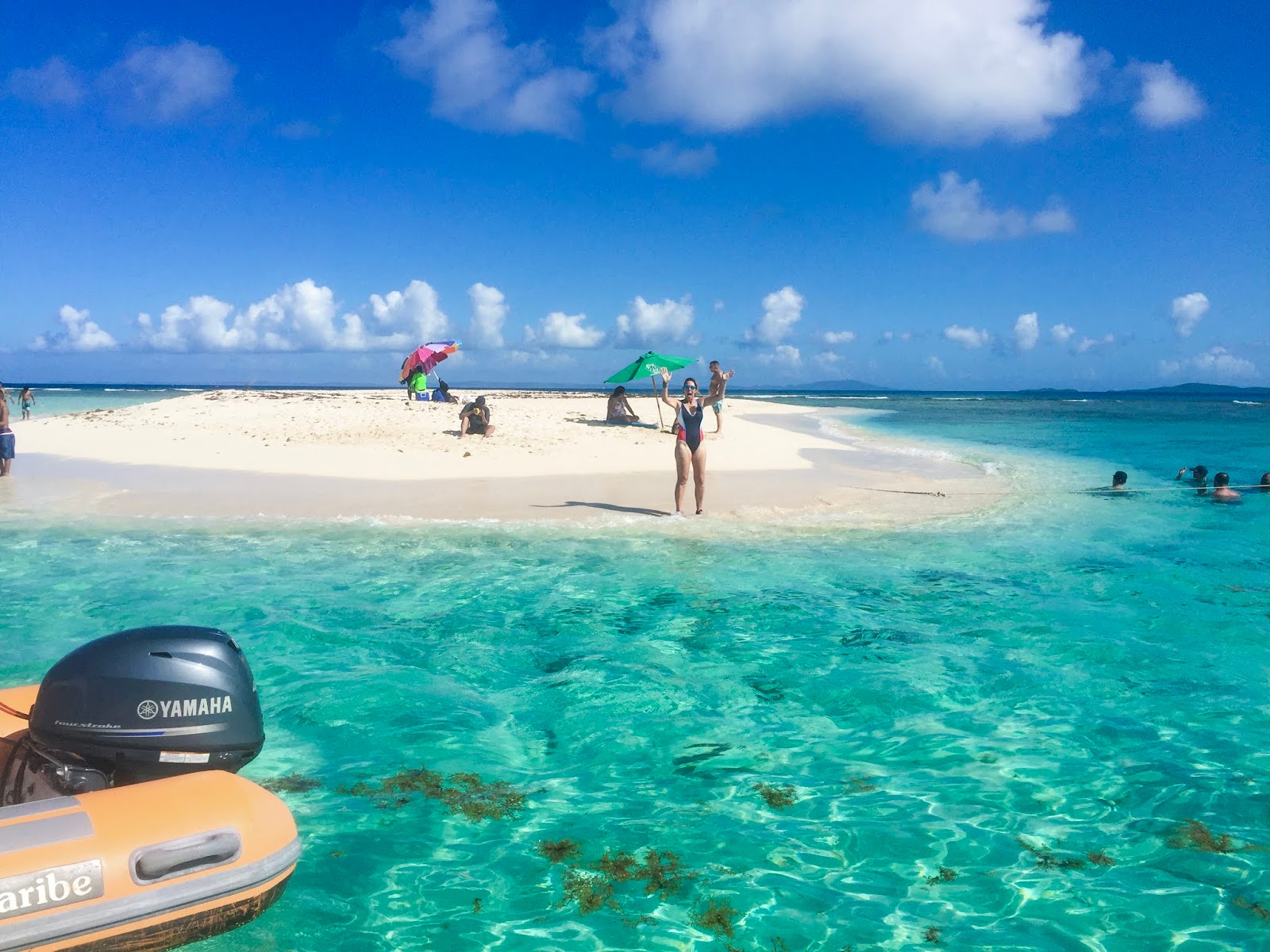 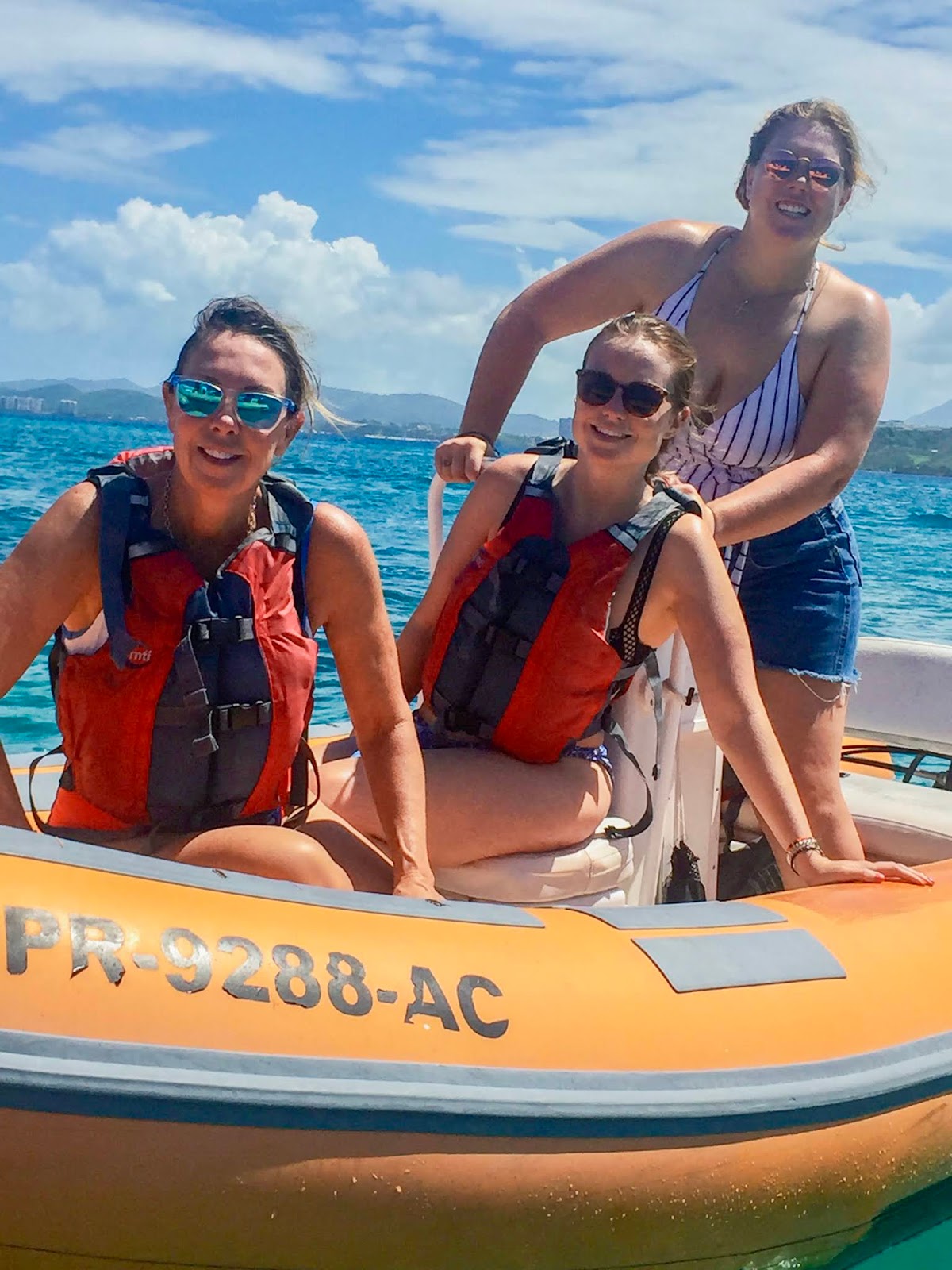 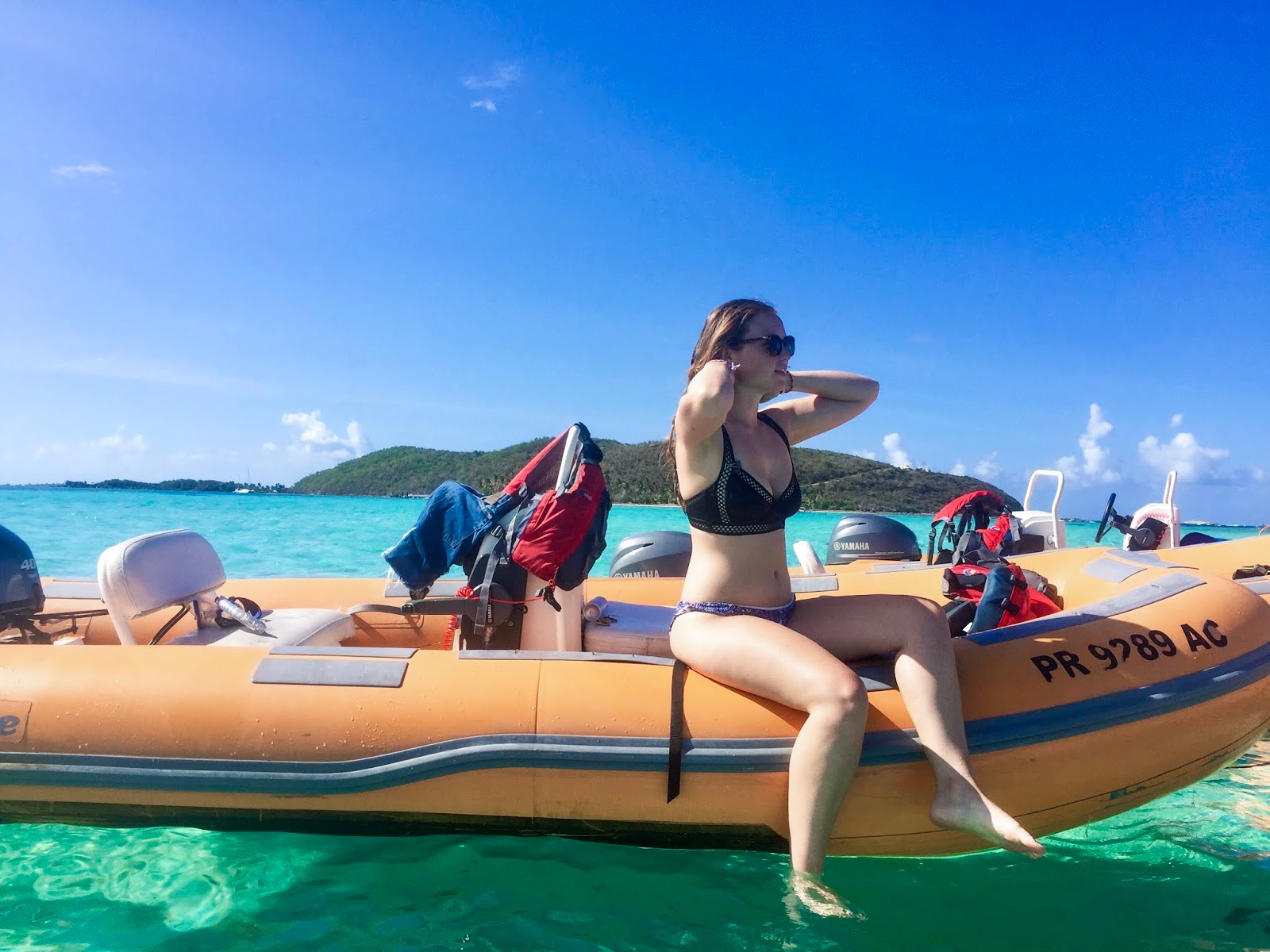 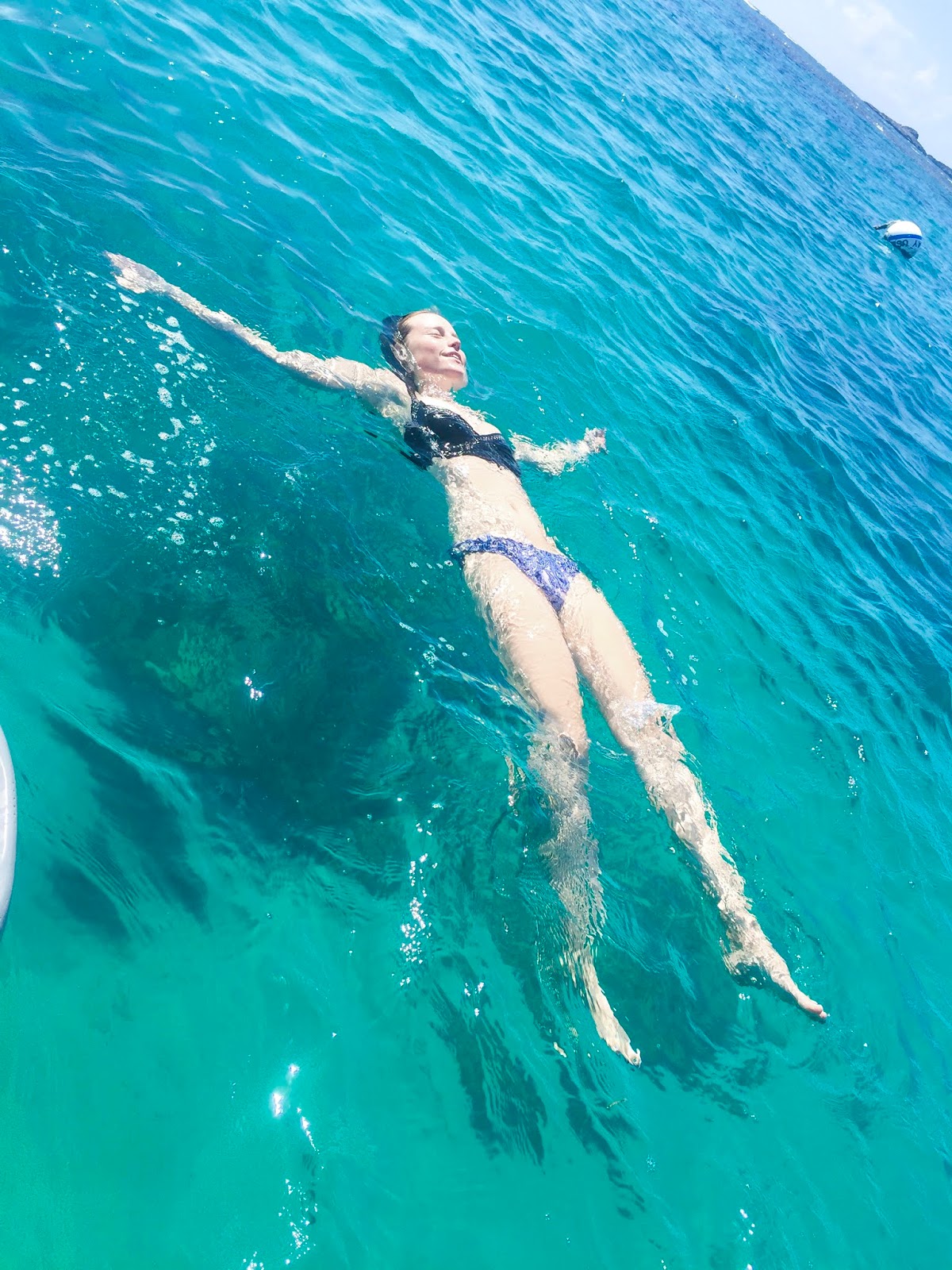 Four wheelers are pretty basic, but riding them through El Yunque tropical rainforest with gorgeous views, scenery, and wildlife was a totally new experience. We used Carabalí Rainforest Adventure Park. 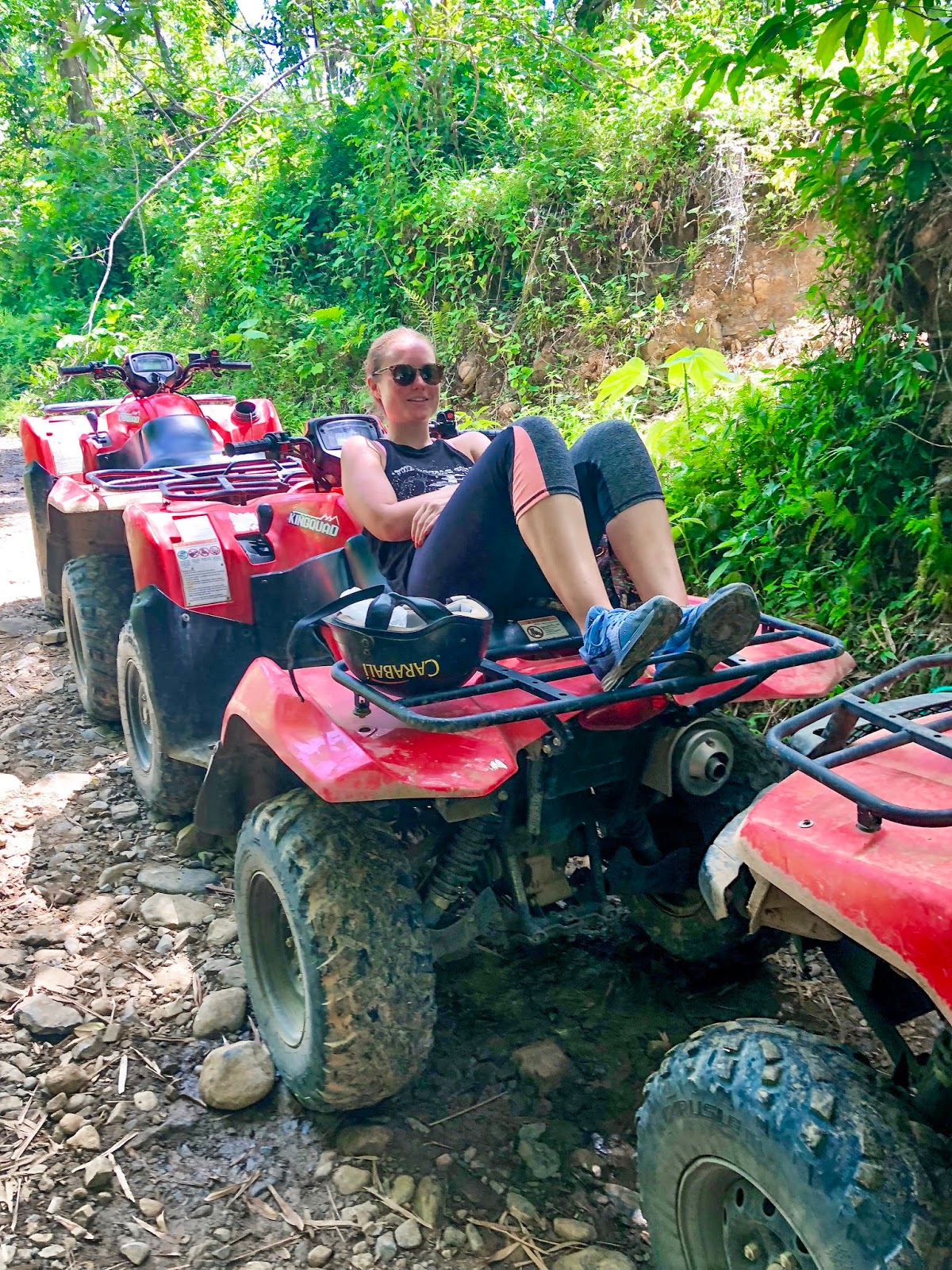 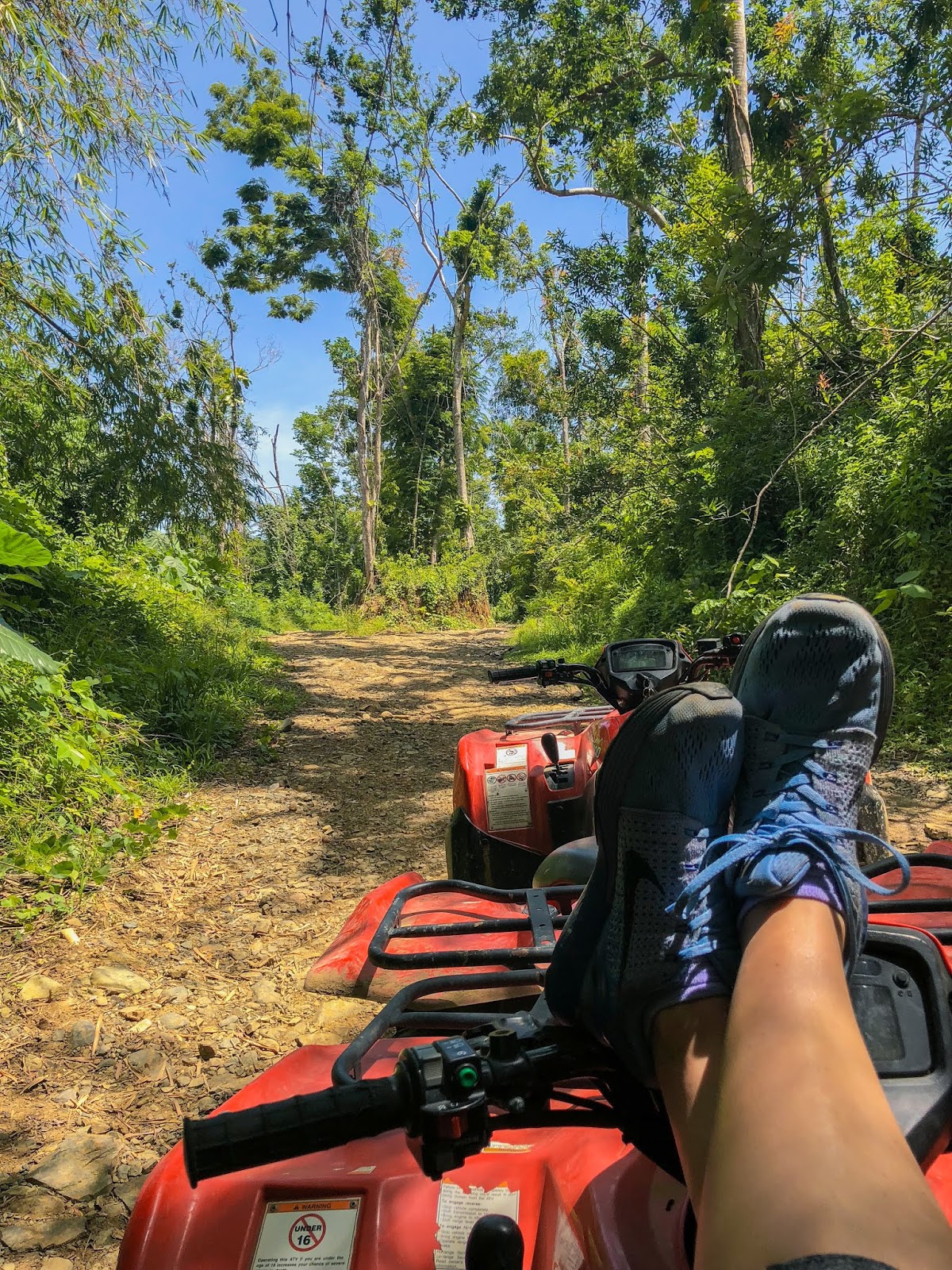 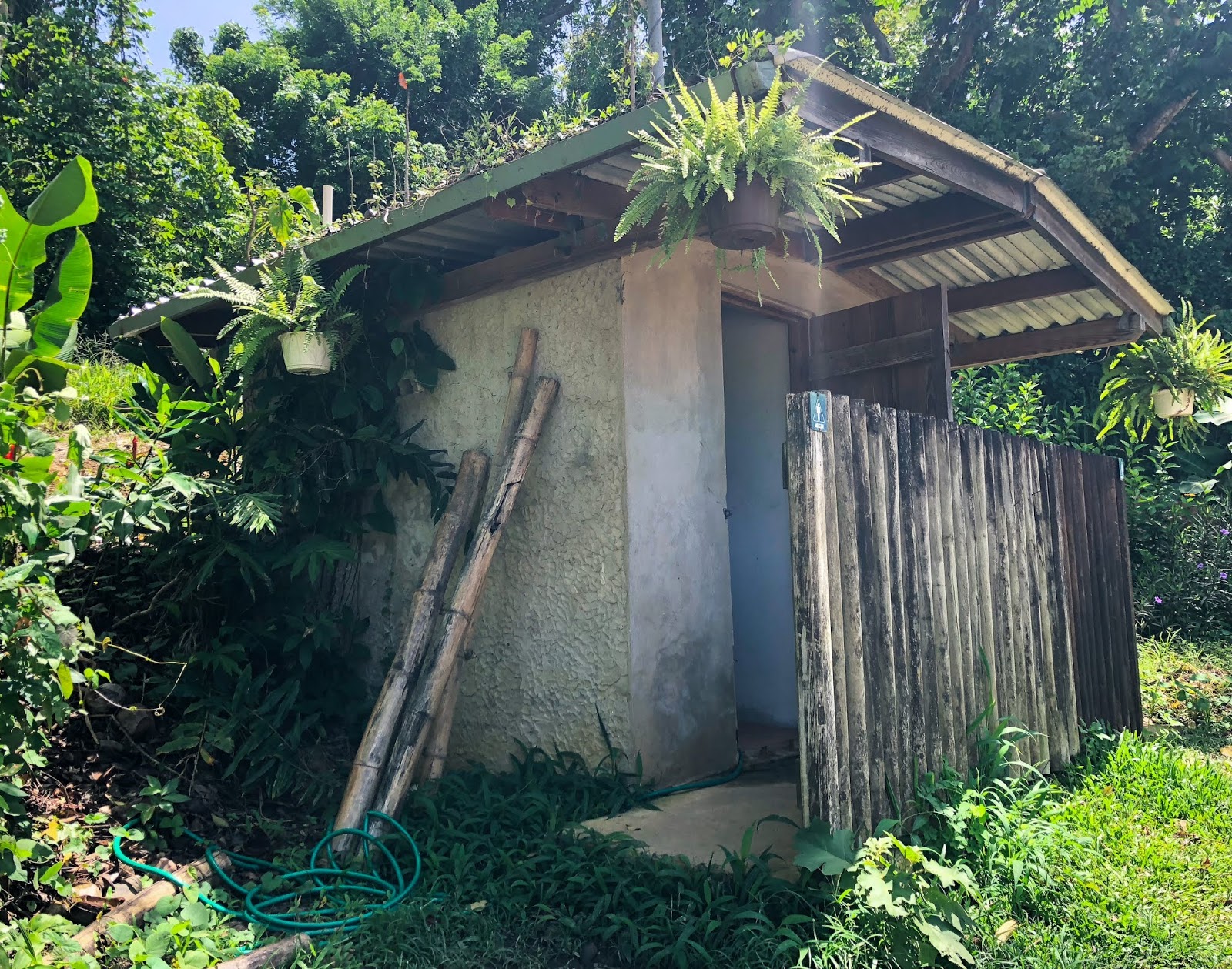 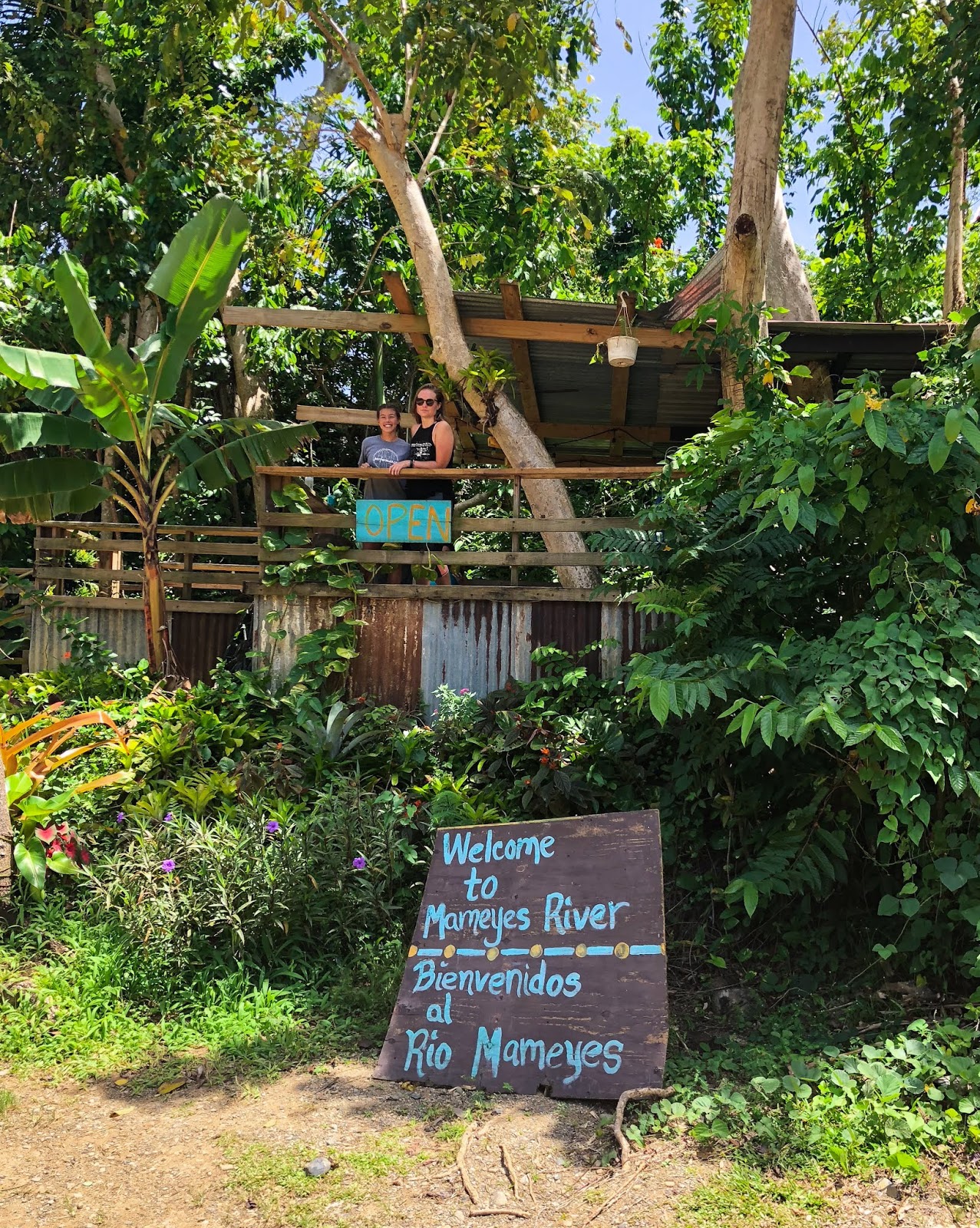 Puerto Rico has some incredible local cuisine similar to other Spanish nations but with its own unique flavor. As a vegetarian, I am always looking for ways to eat healthy and meat-free without compromising the cultural experience. Mofongo was my absolute favorite dish that we tried. Deep-fried green plantains mashed together and topped with meat or vegetables. Rice and beans is a pretty classic dish that was easy to get at the beach-side markets. On the way back to the Culebra ferry (tired, sunburnt, and hungry) we grabbed some Empanadillas at a bar near the dock and my goodness, they were incredible pockets of cheesy, fried goodness. I think meat-eaters might have a few additional recommendations, but these were my vegetarian go-tos.

While in San Juan, we stayed at an Airbnb in the Condado area, which was easy to book (as AirBnB usually is) and our host was super nice and knowledgable of the area. In Vieques, we stayed at a great inn called the SeaGate Hotel. Kelly, the owner, was extremely helpful with booking activities on the island and went out of her way to make our stay memorable.

Puerto Rico may feel like a foreign country to some Americans, but as it's an unincorporated U.S. territory so you don't need a passport or visa to enter.

No hablas español? No problemo! Puerto Rico is a Spanish-speaking island and although my family can speak basic Spanish (some better than others), most people we interacted with were more than willing to speak to us in English and forgave our mediocre Spanish skills.

Is it ethical to travel to Puerto Rico post-hurricane?

Puerto Rico was devastated by two hurricanes at the end of 2017. When my family arrived in Summer 2018, the damage was still evident in many of the areas that we visited. Although Puerto Rico was recovering from the hurricanes, it's a slow process (I'm not going to get into the politics of this here on my blog). According to Wikipedia, tourism accounts for approximately $1.8 billion in income for Puerto Rico each year and in 2009 it accounted for 7% of the GNP. After the hurricanes, that income dropped. Many people we spoke to were glad that tourism was increasing again after the hurricanes as it accounted for a large portion of their livelihood.

Let me know in the comments if I missed any awesome Puerto Rican adventures!
travel